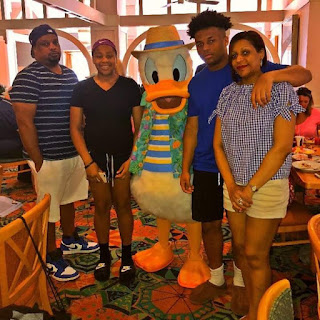 Hey, my name is Zoe Brooks. I’m 13, I attend Holy Savior Academy in South Plainfield, I’m a 5-7 guard for the New Jersey Sparks (Class of 2023) and here are some of the things I do on and off the court on a daily basis.
Monday, April 23
After big tournaments, I like to rest on Mondays. That wasn’t the case today. My dad picked me up from school and told me I had to hurry up and get my basketball gear because he scheduled a workout for me with a high school coach. Normally I train in a group, but this was one on one for an hour. We worked on a lot of countermoves and the coach used the clock on the scoreboard so that everything was done at game speed. After I was done working out I went home and watched my favorite TV show Supergirl on the CW.
Tuesday, April 24
After school I did my homework and then went to the park with my dad. He didn’t work me out. Instead I shot around while he grabbed my rebounds.  After about 30 minutes I asked him to play me. Of course I won both games and I had a lot of fun.
Wednesday, April 25
Sparks practice was cancelled so I was able to work out with my trainer Eric Myrick. My friend Jadin Collins, who also played on my school team during the winter, was there. As usual the workout at EMB was good.
Thursday, April 26
We took my brother to get a haircut from his barber, Tank, and then me and my dad went shopping at Menlo Park Mall.  I got a bunch of clothes and then went to my hairdresser to get my hair washed and braided.
Friday, April 27
I had a hard time concentrating at school because I knew we were going on vacation today. My brother went on a class trip to Great Adventure and as soon as he got home we headed to the airport to fly to Disney World. My brother’s 18th birthday is coming up and this is where he wanted to go to celebrate. This was my fifth time going to Disney. Like me and my brother always do on our first night in Florida, we found a hoop and played against each other.
Saturday, April 28
The Sparks were off this weekend so this was the perfect time for our quick trip. When we woke up we went downstairs to the gym and did 20 minutes on the treadmills. Afterwards I went outside and shot around before we got breakfast and headed to Hollywood Studios. We spent the day there, had a great dinner at Ohana, watched the fireworks by the pool and ended the night at the arcade.
Sunday, April 29
We went to the character’s breakfast at the Disney Beach Club and then spent the early part of the afternoon at the ESPN Club watching LeBron and the Cavs beat the Pacers in Game 7 of the NBA Playoffs. Later, me and some man we met from North Carolina played two on two against my dad and my brother. We won the first game and they won the second game (only because they were bigger than us and played bully ball). We were about to play a tie-breaker but my mom said we couldn’t because it was time to go to my favorite park, Magic Kingdom, for the night.


Posted by www.gthingbasketball.com at 7:02 PM