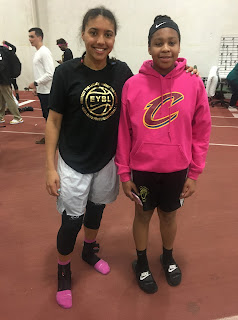 Thanks for reading.
Monday, April 16
Talk about a bad day. After school my dad told me that two of our starters, Kelyse and Kool Aid, were definitely not playing this weekend at the Nike Invitational in Virginia because they are still injured. Also, another starter, Gabby, is out for Boo Williams because her grandfather passed away. Gabby, I’m sorry to hear about your grandfather.
Tuesday, April 17
This week in school was different because we had testing in all of our subjects. At the end of the school day my brain was fried. The good part about testing was that we don’t have homework all week. After school, I took a power nap. After that, I went to the gym and worked out for two hours. When I got home, I ate dinner and Face-Timed my friends.
Wednesday, April 18
After school, I watched TV and then went to EMB to train. My hamstring was feeling a little tight during my workout, so when I got home I did a bunch of stretches to loosen it up.
Thursday, April 19
I had a good session with my trainer Eric. We worked on my handle and shooting. This was my last work out before heading to Boo Williams and I think I’m ready. Afterwards, me, my brother and my dad picked up Chili’s for dinner and I went home and did laundry and got packed for the weekend.
Friday, April 20
My dad woke up the entire house at 3 a.m. and we got on the road around 4. About 25 minutes into the ride, my mom realized she forgot her cell phone and we had to turn around and go back home. The trip took us about seven hours and the first thing we did once we got to Virginia was get something to eat and hit the mall. At the mall I ran into my Sparks’ teammates Kayla, Kelyse and Kool Aid. I think it’s cool that Kelyse and Koolaid came to support the team even though they aren’t playing. Our game was at 8 p.m. and we played the St. Louis Eagles. I could give you a bunch of good excuses why we lost, but the bottom line is it wasn’t our night. Afterwards, me and my dad stayed in the gym watching a bunch of other 14U games and I kept feeling if we were healthy, we could beat them all.
Saturday, April 21
Without three starters and playing up a grade, we took the court against the Maryland Belles 14U at 8 a.m. We started off strong, led by four at halftime and won the game by double digits. My shot was on and I had 15 points in the first half but what I was most proud of is the way the entire team contributed to the win. Special shout out to Carey, Lauryn, Kayla and Mikaela for the way they stepped up in the second half.
Our second game of the day was against the Alabama Twisters. It seemed like every shot we took went in and we won by a lot. Tori and Laila were great for us.
After the game I went over to watch the Sparks 17U EYBL team play the Fairfax Stars. It was an unbelievable experience. There were so many college coaches checking out the game, including UCONN women’s coach Geno Auriemma. The stands were packed and even though the Sparks lost, it was a great game. Azzi Fudd from Fairfax really stood out to me. She could shoot threes, had an amazing pull up, could get to the rim and played just as hard on defense as she did on offense. I later found out she was only a freshman. I wear No. 35 because Kevin Durant is my favorite player. Azzi wears No. 35, too.
Sunday, April 22
Me and my dad went over to Boo Williams to watch some more EYBL games. Fairfax beat Team Takeover in the EYBL Final and Azzi, who was the best player I saw at the tournament, scored 26 points. After the game, I took a picture with her before heading over to support the Sparks 17U EYBL team. The Sparks beat Boo Williams by two to finish with a record of 4-1.

Posted by www.gthingbasketball.com at 7:43 PM