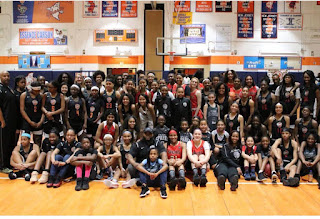 Hi, my name is Zoe Brooks. I’m a 13 year-old from Plainfield, N.J., and this is my first diary of a Female Baller. I’m in seventh grade, I play AAU for the New Jersey Sparks and my basketball nicknames are Baby Storrs, Bully and Z-Bow. Thanks for reading.
Monday, April 9, 2018

Today is my first day back from Spring Break. After school, we had Sparks practice. Although our practices are hard, I always have fun because my teammates are some of my best friends. We did a lot of skill work and focused on defensive shell drill.
Tuesday, April 10, 2018

Ouch! I woke up and my back is killing me. I think I hurt my back last night at Sparks practice. I have to rest and ice it. The last time I felt like this was back in the fall. It ended up being growing pains and I grew about two inches. I’ve decided to stay home from school and just do my homework online so that I won’t be behind tomorrow. After I completed my homework, I watched TV and Youtube for the rest of the day.
Wednesday, April 11, 2018

I woke up and my back was still hurting me but I went to school. Before I left, I put Icy Hot on my back because that helped me last time my I felt like this. I was feeling a little better after school, so my dad took me to the gym. The name of the gym I go to is called Lifetime Fitness. It’s one of the best gyms out there. It has two full basketball courts, a really big weight room, an indoor pool, an outdoor pool and a kiddy room because you have to be 12 years old or older to go up in the weight room. I tried some ball handling and my back was bothering me so I decided to just do shooting. I put up shots from different places on the floor. Then after about a hour and a half of that I went upstairs to try and stretch my back out. After two hours in the gym I went home and went to sleep.
Thursday, April 12, 2018
Today was pretty cool. I was still dealing with my growing pains, but we didn’t have an actual Sparks basketball practice. Instead we had Media Day and a WNBA Draft Party to celebrate former Sparks players Myisha Hines - Allen and Teana Muldrow on being picked 19th and 29th in the WNBA Draft. Although I don’t personally know them, that’s a great accomplishment and shows what happens when you work hard. Congrats!
Also, we received our new uniforms for the upcoming AAU season, had a photo shoot and there was food and music.
Friday, April 13, 2018

Finally, I woke up feeling good enough to get back to my normal basketball routine. After school, I worked out with my trainer at Eric Myrick Basketball for two hours. I love going to EMB on Fridays because he focuses on catch and shoot and shooting off the dribble with the proper footwork and form.
Saturday, April 14, 2018

Today was our first AAU tournament of the spring - the New Jersey Sparks Basketball Classic in Paterson. During the winter season, our team, which is coached by Chez Williams, Keith Gilchrist and Brandon Howell, won 57 games and lost just once. We won a lot of championships and were one of the best seventh grade teams on the East Coast. For the spring, we’ve decided we’re going to play up a grade in order to be challenged more. We had three games and none of them were close. We blew out the New Jersey Crusaders, St. Michael’s and Philly Freedom Stars.
Sunday, April 15, 2018

We beat a tough New York Havoc team by double digits in the semifinals but had a really bad game against Takeover in the championship. None of us played well, we had two starters carried off the floor because of injury and Takeover did to us what we normally do to other teams. We travel to Boo Williams in Virginia on Friday for a big tournament and we’re going to be short-handed because of the players that got hurt. As we learned today - Gabby, Mikaela, Carey, Tori, Lauryn, Kayla, Laila, Kool Aid and Kelyse - we have to play better in order to compete on this level. I’m confident we will.
Posted by www.gthingbasketball.com at 4:39 PM