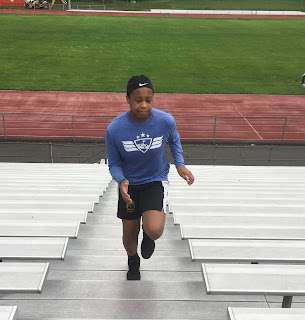 Hey, my name is Zoe Brooks. I’m 13, I attend Holy Savior Academy in South Plainfield, I’m a 5-7 guard for the New Jersey Sparks (Class of 2023) and here are some of the things I do on and off the court on a daily basis.
Monday, May 14
After playing four tough games in the Rose Classic this past weekend, my dad told me I could have a day off to let my body rest. I spent my time doing homework, texting, watching Super Girl and playing Fortnite.
Tuesday, May 15
Although I’m only in seventh grade, me and my dad talk a lot about which high school I’m going to go to. We were looking at St. John Vianney and Rutgers Prep. I like SJV because I want to play in the Shore Conference because everyone says that’s the top conference in the state. My dad likes Rutgers Prep because of the education and Coach Klinger. After school today a high school coach worked out me and a player from Team Miller. We did a ton of full court and half court one-on-one drills and it was a good workout.
Wednesday, May 16
I had Sparks practice in Paterson which took us about an hour to get to from Plainfield because of all the rush hour traffic. Practice was good and Coach Chez worked us out hard. One of our old teammates Dana stopped by practice with her sister and her dad. We hadn’t seen her in a while and she gave each player on the team brand new knee pads that matched our uniforms.
Thursday, May 17
Now that I’m 13, I’m starting to do more strength training and conditioning type stuff. After school I walked/jogged around the track eight times and then I did an hour of skills and drills with Eric Myrick. I was so tired afterwards.
Friday, May 18
One of my best friends is Ciera Cevallos. She used to play on the Sparks with me but now she plays for our rivals Exodus. We both go to the same trainer which is fun and today we doubled up and did two hour sessions.
Saturday, May 19
For the rest of the summer, we are going to be without two of our starters. Our power forward is no longer on the team and our center is done because she tore her ACL. We beat Team Takeover in the first game of the Philly Face Off. We played New Heights in our second game and they couldn’t miss. We were down 12-0 to start the game. Eventually our shots started going in and I hit the game winning layup in overtime and we won by two points. Afterwards I went and watched our 17U EYBL team which is also coached by Coach Chez.
Sunday, May 20
We blew out Team Providence from Rhode Island in our first game of the day. I had a really good game scoring and setting up my teammates. The championship game against Philly Triple Threat was a different story. Even though I scored 12 points, I couldn’t make a basket to save my life. I’ve never missed so many shots that I normally make and we lost the chip. One of our key players was sick and barely played and we only had six players, but no excuses. I feel like we should have won that game, but hopefully we will get to play them again.

Posted by www.gthingbasketball.com at 11:00 AM