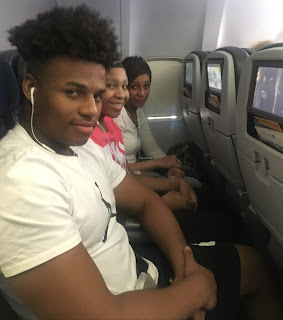 Hey, my name is Zoe Brooks. I’m 13, I attend Holy Savior Academy in South Plainfield, I’m a 5-7 guard for the New Jersey Sparks (Class of 2023) and here are some of the things I do on and off the court on a daily basis.


Monday, April 30
Sadly, today was our last day at Disney World. After packing up our stuff in the hotel room, me and my brother Jalen played ping pong, air hockey and shot around on the basketball hoop outside for most of the morning.  Around 3 p.m. we got something to eat and hopped on the plane back to New Jersey. It was a great vacation.
Tuesday, May 1
After a few days off it was time to get back into my normal routine. I woke up, showered, ate my breakfast and went to school. After school I worked out with my trainer Eric for an hour and then I had dinner and did my homework.
Wednesday, May 2
Happy Birthday, Jalen. My brother turned 18 today. My parents took him to his favorite restaurant Bahama Breeze for dinner, but I didn’t go because we had Sparks practice. I already missed Sparks practice on Monday because I was flying home from Florida so I didn’t want to miss it again.
Thursday, May 3
Today at school we had a bunch of tests in religion, language arts and social studies.  When I got home from school I hurried up and banged out my homework because I had to go to Eric for training at 6 p.m. Once that workout was done I ate dinner and studied for my math test on Friday until I fell asleep.
Friday, May 4
I wanted to go to my trainer but I couldn’t because I didn’t have a ride. My parents were focused on my brother’s junior prom so I just walked to the park and worked myself out. After an hour, I spent the rest of the night playing my favorite game Fortnite with my friends. When I’m not playing basketball, you can usually find me playing Fortnite.
I also talked to some of my friends on the phone and got packed for our trip to Washington D.C. this weekend.
Saturday, May 5
My dad woke me up at 5 a.m. and we were in the car heading to the Team Takeover tournament an hour later. Our team played well and destroyed Team Takeover in our first game. There was a seven hour break between games so I went to hang out with my friend Gabby until the next game. Our second game was against Lady Prime and I started off really strong. Then I sprained my ankle and had to sit out for the rest of the game but we still won. Gabby’s grandparents live in Virginia, so after the game I went with her to their house to hang out and ice my ankle.
Sunday, May 6
I woke up and my ankle was killing me. My dad gave me two Advil, Kool Aid’s dad taped my ankle and my teammate Kayla let me use her ankle brace. We were playing our rivals Norfolk Express from Virginia and although I was in pain, I wasn’t missing this game. Our starting center Kelyse was still out hurt and our other center Mikaela was running late because her parents confused the game times. That meant although I could barely move I had to play center. We fell behind 11-1 and 13-2 before Coach Chez got on us and we started playing like the Sparks.
The game was tied early in the second half when one of their players fouled one of our players really hard. Our player’s mother went on the court to check on her. Then I saw one of their player’s mothers come on the court and then it got crazy. For the next few minutes, there was a lot of arguing on the court and in the bleachers by the adults while both teams just sat on the bench wanting to finish the game. After all of the parents calmed down, Coach Chez and their coach decided it would be better if we didn’t continue the game after what happened so it ended in a tie. We are now 1-1-1 in our three games against them.
After the game, me and my dad went to Fridays with Gabby, her dad and brother for lunch before driving home.


Posted by www.gthingbasketball.com at 9:28 AM