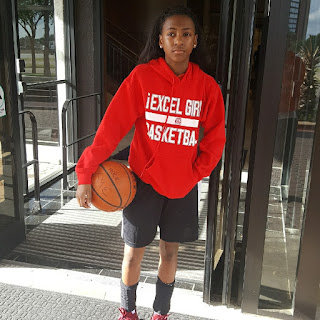 
My name is Skye “The Limit” Owen. I am in the class of 2022 and play my AAU ball for IEXCEL. Thank you to Gthing for giving me the opportunity to take you all on my day to day journey. I hope you guys enjoy it as much as i do.

The first day of the week, Monday started and ended as just another normal day. When I first arrived at school I remembered that I had a religion test so I studied during the morning assembly. I was in class when she taught the stuff that was going to be on the test, so it wasn't to hard to memorize the answers cause I kind of already knew them. Other than that in school ,I just went through my normal classes in the morning. For the latter part of the day, my classmates and I took photos that would go in the yearbook. We were asked to make a 1 and 8 with the students in the class. It took a while for us to figure this out. The photographer and gym teacher were shouting from the roof ,directing the teacher to tell us where to go in the schoolyard . It was chaotic and kind of funny ,we thought we were all done and then they had us do the 18 all over again on the front lawn ,which took a while again. Then we went back to the schoolyard and took photos with our friends. I chose where and how we should pose for the photo and it came out nice. After school was better than during school because I went to the gym. I was able to get a lot of drills done and work on some of my weaknesses. On slow moving days like Monday and Thursday going to the gym is obviously the highlight of my day.


On Tuesday, I went to visit a high school that is interested in me attending.The coach is very nice and has been watching me play for a few years now. The principal and the president of the school were also very nice. The president gave me a tour of the school. Once the tour was over, we were taken to the principal’s office who gave us more information about the school. That visit ended about mid- day. So I got something to eat and headed to meet with my trainer. My trainer worked me out very hard. It was a great workout. I went through a lot of drills that are practical for game situations. Once I left my trainer, I went to watch a varsity practice at a high school that is interested in me coming to their school. I really enjoyed watching the practice and the girls were going very hard. The drills were good. It was killing me that I was only able to watch because I really wanted to play and join the practice. The coach was very cool and seemed pretty knowledgeable. After the practice, I went home and prepared for school the next day. I was looking forward to it because we were going on a class trip.


Wednesday, my favorite day of the week . It was a fun filled day that led from one activity to the next. My class went on a trip to the tenement museum in Manhattan. The tenement museum is a museum filled with artifacts from the Sweatshop era ( late - early 1800’s ). It was interesting because we went inside of the building where the immigrants lived. They had staples in the walls to keep the building from collapsing. My class was split up into 3 groups of 12. We got to chose our groups so my friends were in my group . After a while, some of the kids in my group started to get headaches because the room was small and the their bodies may not have been used to the fumes. When we got back to school from the trip, it was about 12:00 pm, so we went to lunch and after lunch we had gym. When the day was over, I talked to my friends outside then went to the gym to workout. When I was at the gym my mom called and told me that my aunt from Florida was with her and that she was going to be staying until Monday. This was great to hear because i hadn't seen my aunt in about a year. When I got home my mom and aunt were there laughing in the kitchen about a joke. Then I found out from my dad that not only was my aunt going to be there till Monday but my brother was also coming to visit from his college till Monday. It would be great to spend time with both him and my  aunt. Since I didn't have school the next day, I stayed up until my brother got home it was only about 11 o'clock pm. My Brother and I talked for a little and then watched TV and did some strength and conditioning work like I do everyday.


Thursday, Thanksgiving day was both an early and busy day. I got up at 5am and went to the gym to workout because I knew I wasn't going to have time during the day to because I was going to help my mom cook. When I got home I went to lay back down and then an hour or 2 later my mom woke me up saying that she needed some help cooking. So I helped. I cooked the candied yams and my mother cooked her family famous macaroni and cheese. It was great she had cooked 3 pans of it because we were expecting many people to be at my other aunts house for Thanksgiving. Each of the cooks in my family are assigned a couple of things to cook. My grandmother cooked the turkey and ham, that was delicious. My other aunt brought the pies and her great pineapple upside down cake . There was more food but way to much to name each one.  It was a long day.

On Friday or “ Black Friday” my mom, my brother and I went shopping . We ended up splitting from my brother. So I went to the stores with my mom while my brother shopped by himself. The mall was crowded. You could tell everyone was intent on buying something they wanted. There was a certain flow of the walk that almost everyone in the mall understood and followed. They were all walking on the right side of the mall. Most of the time I don't usually like shopping but this time I did. When we first got to the mall we went to meet my cousin who was visiting from her college in Pittsburgh. My grandmother and mother helped my aunt pick out an outfit. I usually do not like black Friday shopping but this year it was great.


Saturday morning I woke up pretty early and then woke my brother up so he would take me to the gym. Even  though my brother did not work out with me it was a lot of fun having him in the gym. We joked around and also did drills. I was able to get a lot of shots up because he was there and could rebound for me. We first went to my grandmother's house to see how she was doing and to see my aunt who is leaving on Monday. After that my dad called my brother and my mom and dad met my brother and I at my grandmother's house and then we headed to the movies. We went to  see “ Thor ragnarok “ it was a good movie with lots of fighting and action and a couple of funny jokes. I personally thought justice league was better but that is just my personal opinion.


My Sunday began with an early workout with one of my trainers. It was a great workout. I got to play against a few high school girls, work on my shot and finishing around the rim. When I got home my brother and I watched 2 episodes of “Stranger Things” on Netflix. It is a pretty good show, then I headed to the gym again to warm up for my game. The game was good. This week we had no team practice because of Thanksgiving but we still did great. After the game I headed to my grandmother's house again because my cousin, aunt , and brother visit was coming to an end. They are going to be leaving tomorrow.  We all talk about different things  and crack jokes. It was nice to be able to spend time with all of them because I do not see them much.


Posted by www.gthingbasketball.com at 7:01 PM