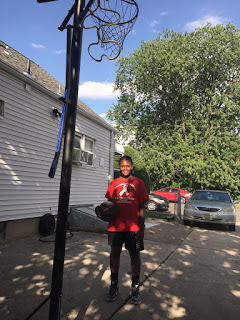 Hello, this is Kayla checking in for the final week.

Monday - All I did today was finish packing and did some running around with my mom for the USJN DC trip. We went shopping making sure we had everything we needed. I didn't do any basketball training, I was off for today.

Tuesday - This morning we left the house very early to head to DC. The USJN DC Nationals was held at the Gaylord Convention Center in Oxon Hill, Maryland. We checked into our hotel, relaxed and headed to our only game for today at 4:30. We won by 15 against Philly Triple Threat and I did okay. My family and one of my closest teammates family went out for dinner.

Wednesday- Today our games were at 4:30 and 7:30. I ate breakfast and my teammates and I chilled until it was time for lunch. My mom took me to Chipotle for lunch and then I took a nap before we headed to the games.  We won our first game by 16 against Team Nova, but then lost our second game against Team TakeOver by 4. We played the team before and won, but that past game was back and forth just like this game was. I did okay today but definitely was disappointed in that loss. We went out to dinner with some teammates to a restaurant and then went back to hotel to get a good night sleep.

Thursday- Today our games were 9:00am and 4:00pm. We won both our games today. Our first game was against Team Nova and we won by around 13. The second game was against Germantown Lady Panthers. We were down the entire game and then we came back in fourth quarter to win by 9. We won our pool and had quarter finals in the morning.

Friday- Today was quarterfinals, semi finals and finals. We won quarterfinals against a different tougher Team Nova. I didn't do much all game long until 4th quarter. I got a couple steals, rebounds and buckets to seal the deal. We advanced to the semifinals and played against another different Philly Triple Threat and lost by 4. We were not suppose to lose that game. After the game I headed to the outlets and then headed back home to New Jersey. Even though we lost in the semi's (5-2 finish at USJN DC), we had a GREAT AAU season and got better throughout the year.

Saturday- I worked out today with a new trainer and I would have to say that was the toughest basketball workout I’ve been put through. Just the warm ups had my legs burning. I didn’t quit or give up because I knew it would make me better. I was completely dead after the workout was done. It wore off a little on the ride home and I did a little shooting in my driveway. After that, I went again with my mom and chilled for the rest of the day.

Sunday- I woke up super early just to go back to sleep. I woke back up around 12 and headed to my basketball workout with Tarik. I did that and just chilled with my mom for the remainder of the day. My mom, brother and I went out to dinner at a buffet. That was it for the day. Also, I'm looking forward to Rites Of Passage next weekend and a couple weeks off after that to rest and refocus before I get back in the gym.

Posted by www.gthingbasketball.com at 5:08 PM