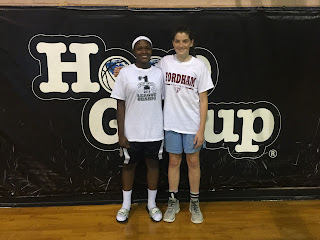 Hello Basketball World, this is Kayla checking in for Week 4.

Monday - This week I will be going the Nothing But Skills Camp at Hoop Group in Neptune, New Jersey. This camp focused on game situation and competitive drills. We started by doing a regular warm up routine and then we went straight into competitive drills. It started with 1 on 1 and it went up from there from 2 on 2, 3 on 3 so on and so forth. I like the fast pace of everything. They have something called a working lunch where after lunch, we went into small groups and worked on either shooting or ball handling. They also had a group of post players to work on moves with former University of Maryland player, A’Lexus Harrison. We finished the day with a continuous 5 on 5 scrimmage. I have strength & conditioning training later today at the park with my brother. I like when my brother is able to work out with me because we work harder to beat each other.

Tuesday - For the rest of the week they're having early bird sessions an hour before camp actually starts. I tried my best to wake up early enough and get there for everyday’s session. We did full court ball handling drills and shooting drills. We did similar, but different drills today than we did yesterday. What we did differently today was that we did a regular 5 on 5 game instead of a continuous street ball type scrimmage. Strength & conditioning training today felt good. I did some agility drills with cones, working on my footwork and I worked on the sled to be more explosive.


Wednesday - My mom is taking me camp today being that my father went to visit my grandmother in South Carolina. I got there for early bird to get some shots up before camp started. We went straight into 3 on 3 competitive set drills after a quick full court layup warm up. After lunch we did some drills and then scrimmaged. I had the rest of the day off, so I went to the grocery store with my mom. After we got back, I got started working on my summer packet for school.

Thursday - Today I don’t feel so good. My stomach is hurting and I can’t move the way I want to on the court. I asked for a little break to get myself together, and after that it got a bit better but I was still hurting, just not as bad. I start getting more efficient with my shots being that we were doing 1 on 1 box drills. The rest of camp was okay. I have strength & conditioning again today and my mom brought me here also. I worked on abs and some agility stuff with a weight ball. I really had to push myself through the workout, but I felt really good afterwards.

Friday - I had a great week at NBS this week and if this is not my favorite camp of the summer it will be amongst one of them. My favorite thing about the camp was the competitive nature of it. I really can’t think of anything that I didn’t like about the camp. At the end of camp there were awards given to multiple players. We have team practice today in the HOT Eastside HS gym. I got there a bit before practice to get some shots up. It didn’t take long for me to start sweating just putting up shots.
​
Saturday - I only have 1 game today at the World Exposure Basketball 1st Annual Tune Up Pre Live Period Showcase against an older team. My mom brought my grandmother to see my play, being that she lived close by and she hadn’t seen me play in a long while. It was hot in the gym,but I’m so used to working out, training, and practicing in the heat, that the games aren't difficult when it's hot. We beat them by around 15 points, but the game was intense all game long. I ate a little something with my mom and grandmother after the game and enjoyed the rest of my day.

Sunday - I got to sleep in today being that I had nothing on the schedule basketball wise. I woke up around noon and had a late breakfast. After I ate, I worked on my summer packet for a little bit. I rested for the remainder of the day just watching TV.
Posted by www.gthingbasketball.com at 12:54 PM