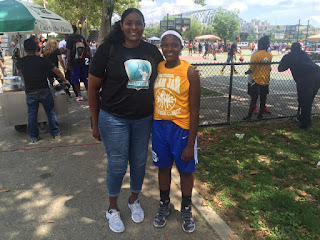 Hello Basketball World, this is Kayla checking in for Week 6.

Monday - Today I woke up early to get to my first game in USJN Kean. We had the first game of the day, so I was able to get a good warm up before the game. We started off the game slow, which caused us to be losing all until we got it together. One of my teammates got hurt in the very beginning of the game and had to leave, which we had to adjust to. For some reason, this is a bad habit of my team that we need to work on. We ended up beating the team by 36 points, the score was 61 to 25. I would say I had a good game. After, my father took me to go check up on my teammate that got hurt during the game. She couldn't put pressure on the knee so she was on crutches. She got an MRI and tomorrow they will get the results. I was going to do strength & conditioning today, but I didn't want to be sore for the two games we have tomorrow.

Tuesday - If I didn't mention it before, we were playing up in this tournament just like we do in all others. Our first game was against Philly Belles. They were bigger, stronger and faster than us, but we knew we had a chance since we play up all the time. We started off the game with a lead of 6-0 and everything just went downhill after that. They started moving the ball and moving without the ball really well and we just couldn't stop it. We tried different defenses, but they were just getting whatever they wanted either way. They were pressing us and we struggled from time to time on that part as well. They ended up beating us by 15. There was quite a bit a time before the next game. We ate and made our way to next gym. There were no games going on there so we were able to use the gym to our advantage. We started off slow again despite our good warm up. This time though, we were down all first half, it was all tied up at halftime. This team was overly aggressive on offense and defense, so for the second half we had to match their intensity. We did just that and came out with the win. I trained at 6 today because there is only one game tomorrow. The training went well and I got loosen up my tight muscles. After this, I went out to eat with some of my family at Applebee's being they were in town for a while. I enjoyed myself reuniting with my cousins who I haven't seen in a long while.


Wednesday - Today is the last game of this tournament. My family came to watch my game being that this would be a first for them. I performed pretty well if you ask me, scoring and rebounding a lot. This team also strived with moving on the offense side which was hard to keep up with at times, but we did for the most part. I trained today after the game as well. I choose to do it earlier rather than later so I could rest up more. I rested for the rest of the day.

Thursday - Today I woke up around 10, but got up at 1. I ate breakfast and got ready for the day. My dad wanted to take me to get registered for the girls basketball camp they have every summer here in Paterson. We drove around looking and calling and the camp was still nowhere to be found. After a while, we just went and waited for my speed & agility training later. I worked on speed with the ladder and agility with cone drills. Afterwards, I went to Eastside to get some shots for about an hour. I worked on my shot, and my shot only.

Friday - Today I had a day off, no training or games. I got a lot of sleep and rest. What did do though was finish my math summer packet and some chores around the house.​

Saturday - I have 3 games in the NY blacktop summer leagues. The first game we played Brooklyn Stars and blew them out. It wasn't easy though because of the double rims and the heat itself. I did a good job protecting the paint being that all of our bigs but one was out and injured. Our back to back second game was supposed to be against the Gauchos/Lady Choz, but they forfeited because they didn't have enough players. The third game in the Bronx we played against some older girls. They had the speed over us but that was about it, we were able
to get the best shot possible on offense. After, my dad and I went to go visit our cousin who lives in the area. We headed home after quite a while.

Sunday - We weren't able to get any games today so I didn't have to wake up real early. My mom, brother, and I went to eat brunch at a diner because there was nothing at home. After that, my mother took a school friend of mine and myself to a trampoline park called Urban Air. I enjoyed myself for the first time going there. We left there and went home.
Posted by www.gthingbasketball.com at 5:11 PM