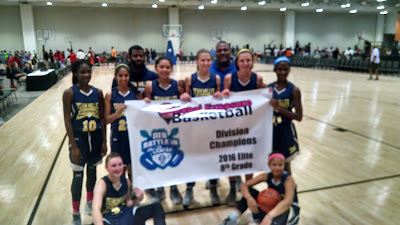 Hello Basketball People, This is Brynn checking In with my Diary for week 6.

Monday: Today I found out that me and my friend Ben have been made parents of triplets for our health project. Our babies are coming Thursday and we are going to have to figure out how much it will cost to raise them. This should be a fun and interesting project. I went to the Tournament of Champions with Emma to watch Franklin and the twins play against Manasquan. I was an amazing game, I have never yelled that loud or much at a game. Kennady hit the winning shot at the buzzer again. I couldn’t believe it, but I knew it was going in as soon as it left her hands. I am so happy Franklin.


Tuesday: After school I had to go over to Sayerville High school to take a picture with some of the other girls for the Home News Tribune all area team. Isi, LaNiya and Amanda were there too. After the picture, I went to Franklin for late practice. We mostly just worked on drills and working as a team again since it’s been so long since we’ve played together. We finished with a scrimmage against the older girls.

Wednesday: I took my last biology quiz for this semester, hopefully it will bring my grade up. My high school coach also came by to give me my varsity letter for playing basketball. After school, I went with my friends to get something to eat downtown and finished up my homework. We had a late practice at Bound Brook tonight and finally, the whole team was there. Bound Brook is a smaller gym so we mostly just worked on drills and plays. We finished with shooting. We also just found out that we are playing this weekend in our first tournament.

Thursday: I had a social studies test today and have been working on our parent project in health.  After school, I went to the mall with my friends to look for a bathing suit for vacation and then we finished our homework. After dinner, I went to practice. The Franklin team was having a meet and greet at the high school for the girls’ basketball team since they won the TOC. It was funny to see the twins signing autographs for the little kids. At practice, we ran a lot, went through our plays, and then scrimmaged with the older girls. I found out that the twins are not going to be able to play at the tournament this weekend which makes me nervous. I always feel more confident when they are there on the court with me.

Friday: After school I went to train with Coach Foderingham, I was only going to stay for an hour or so because I have an early game tomorrow morning, but we ended up working out for about two hours. Lot of shots and ball handling drills. My arms were burning. After training I went to the movies with a few friends to see Beauty and the Beast. I thought it was good.

Saturday: We had our first official game of the season early this morning. The twins and Maddie couldn’t play today so we played with six. The first game was okay, we are not in our normal rhythm yet,but it was fine. We still won.  The second game was harder and more physical. Only having six was also tough and you can tell we are not in our normal game shape yet. I was exhausted by the end of the game and I have a horrible head cold, so I am not feeling great. I just hung out with some friends after I got home and then went to bed.

Sunday: I slept in this morning and am still feeling horrible. I went prom dress shopping with my sister in the afternoon but she didn’t find anything. I had two more games this afternoon. We had Maddie back for today’s game, but still no twins. The first game was okay, very physical, but we won. The second game was bad and the longest game I think I have ever played, must have called fifty fouls. Three of our players ended up fouling out and we finished the game with four on the court. We definitely need to get the twins back and get back into shape. I haven’t played four games in two days in a long time. I am tired and sore.

Posted by www.gthingbasketball.com at 2:34 PM