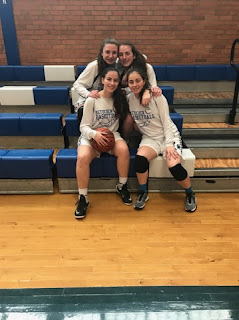 Monday: My group presented our social studies project today to our class.  We had to make a board game about the history of India and also bring in Indian food.  After school, we had practice to get ready for our first state game. We worked on fast break plays and defensive slides. After practice the team got together for a pasta party at our senior’s house and we are all going to wear tie-dye tomorrow for the game. I am nervous but excited about tomorrow’s game. I think we should do well.

Tuesday: Today was our first state game.  We won, but I had a horrible game. I am happy for my sister who had a great game, and our team played well, but I just couldn’t find my rhythm. I hurt my finger and couldn’t stop the bleeding so I was distracted. I know I was making poor shot decisions and couldn’t make a layup. It was the most frustrating game I’ve played so far this season.

Wednesday: I woke up this morning still upset about the game yesterday. I wasn’t feeling great, so I went in late.  As the day went on, I snapped out of it and am looking forward to tomorrow’s game. We had a good practice and I feel more confident about tomorrow’s game.  After practice, I went to see my teammate’s second round state game. Even though they were the lower seed, they were winning the whole game, but couldn’t hold on at the end and lost.  It was a fun game though because I got to see a lot of my teammates and we are all excited to start the spring season.

Thursday: Today was our second round of the states.  I went in early with my teammate Tina to shoot before school.  We practiced for about an hour and then got breakfast. The game was really good, I was finishing my shots, making my free throws and getting everyone involved.  I was one of the better games we played this season as a team and we are so excited to be heading into the semifinals.  After the game, we got some dinner and then I had to finish up my homework.

Friday:  I had to bring in donuts for my health class today.  Each week someone is assigned food to bring and this was my week.  I was supposed to have a quiz today in health but it was moved to Monday was is good because I really didn’t study much for it yet.  We had a good practice after school and everyone is really excited for tomorrow’s game, although we know Shore is a team that better than their record and seeding. We play them a lot in state playoff’s and know how tough they are to beat. After practice I went to the Franklin semi-final state game to watch my teammates.  Franklin’s whole team played great and they got the win. I think they have a very good chance to win the whole bracket.

Saturday: I couldn’t sleep last night I was so excited and nervous about today’s game. I went to train with Coach Foderingham for about an hour before I had to get to the high school gym. We just worked on shooting and foul shots. My team went to the gym about two hours before the game to do our walk through, but Shore was already at the gym so we couldn’t do our normal routine. My sister also lost her sneakers which wasn’t good and had to wear an old pair of mine for the game. The game was low scoring and a defensive battle for the first half. We were down 5 at the half and came out totally flat in the third. At one point, we were down 17 but then started our comeback. We got the game to within 7 and then I fouled out with five minutes left to go in the fourth. I was upset that I couldn’t finish the game and help my team try to get the win, but I feel played as hard as I could. It was hard to see our two seniors play their last game. After the game, we went out to lunch and then I went to spend the night at my friend Jillians.

Sunday: Today I did absolutely nothing.  No training, no basketball, just a relaxing day on the couch. I didn’t feel well and am covered with black and blues from the game. I am sort of sad that the season is over but I am really looking forward to playing with my AAU team again. I think our first practice is going ​to be on Thursday and I can’t wait. I am also going to try to go to the Franklin and Bound Brook finals this week to watch my teammates hopefully win their games. Going to bed early tonight.
Posted by www.gthingbasketball.com at 7:17 AM