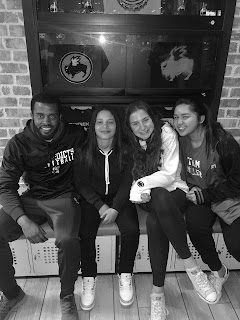 Monday: I had a biology test today. I don’t think I did very well and I didn’t finish so I will have to finish it up tomorrow. Now that basketball is over, I am going to start working out with our school trainer after school. She is going to put together workouts to help me with conditioning and strength. Today, I just went to shoot after school until the softball team kicked me out. I had a lot of homework tonight, so I ate dinner, did my work, and went to bed.


Tuesday: I finished my biology test this morning and then had a pop quiz in social studies.  I think I did okay.  We are starting salads in cooking which I love, so this should be a good week. My brother had his first basketball practice tonight, so I went with him to Franklin and trained with Coach Kevin and my teammate Nina. We worked on pull up shots and post up moves. We also ran a lot and I think I am going to need to get in better shape before our tournament season start. I need to start running more on my own.

Wednesday: I went to school early today to shoot. I could only have the gym for a little while since they needed to set up for a Wellness fair that was going on today during school.  We started working on narrative essays in English and I made a great spinach salad in cooking. I shot after school for a little while and then went to train with Coach Foderigham. Today’s training was insane, my arms were
burning and I was exhausted when we were done. I must have put up 500 shots.

Thursday: I went with some of my teammates to St. Benedict’s basketball game in Newark after school where Coach Kevin coaches. We had a good time and then Coach Kevin drove us back for our first AAU practice. Only half the team could come since some are still playing in the state tournaments, but it was still fun to be back with my girls. We went through some of our normal drills, dribbling and shooting and then scrimmaged the 10th grade team. At the end of the scrimmage I banged my knee really bad and had to stop playing and get some ice. I hate wearing knee pads but I may have to start wearing them again. My knees are really sore. I kept icing my knee after I got home and then went to bed.

Friday: I was hoping for a snow day today, but there was no snow on the ground when I got up. I got my biology test back and was bummed that I didn’t do very well.  I think I am going get a tutor and really try to get my grade up. This semester has been much harder than the last one and I need to do better. After school, we had our battle of the classes.  It was so much fun.  Our grade did a great job at the lip sync contest and I won the knock out game, but we still came in last.  My knee is still pretty sore from yesterday, just a bad bruise I think, but I am going to take the day off and give it a rest for a few days.

Saturday: I slept over my friend’s house last night and we all went for bagels after we got up this morning. Then I headed to the CYO gym downtown to watch the eighth-grade girls in their semifinal playoff game. My friend’s sister plays on the team and asked me to come watch them play. I thought it was really sweet that they invited me to come. They won the game and I hung around for a little while to watch some of the other games. After I went to get something to eat with some friends then went to see the movie LaLa Land. I thought the movie was strange. I’m not sure if I liked it or not.

Sunday: Went to training this morning with Coach Kevin for a short workout.  Getting up was tough since we lost an hour of sleep. Mostly worked on reverse lay ups, pull up and deep three’s.  After training, Coach Kevin, Niya and I headed down to Toms River to watch the state finals. My teammates play for Bound Brook and Franklin who are both playing for the state group titles. Bound Brook played great and my teammate Cameron had a super game. Franklin also won and everyone played awesome. I am so happy for all of them.
Posted by www.gthingbasketball.com at 2:42 PM