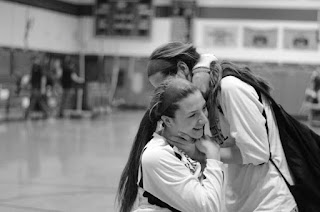 
Hello Basketball World, I'm checking in for my 5th week.

Monday: All anyone could talk about in school today was the big snow that is coming. We think we will get at least one maybe two days off. Since I knew our team practice was going to be cancelled for Tuesday, I went to go train with Coach Foderingham after school. We must have been training for at least two and a half hours. We did a ton of ball handling drills and a lot of deep three shooting. After training I went over to my friend Maddie’s house and hung out with a bunch of friends. I can’t wait for the snow day tomorrow.


Tuesday: I am exhausted from shoveling. We got our snow day, but was not expecting to have to shovel all morning. The snow was so heavy it hurt my back, my fingers, and every other part of my body. My sister and I made breakfast for everyone when we were done shoveling.  My Dad wasn’t home to help since he had to go to work, so we also helped my brother shovel some of our neighbor’s houses. We couldn’t really get out of the house so I just stayed in and watched tv for the rest of the day. We have a delayed opening tomorrow so I am going to go take a long hot bath and then get to bed.

Wednesday: We had shortened classes today because of the delay. After school, I went to Dick’s with my mom to get my sneaker size for the sneakers our team is ordering for the Spring season. While I was at the mall, I got another piercing in my ear. Our team had practice tonight, but we still do not have our full squad because Cameron and the twins are still in the TOC.  Cameron has been really sick so I hope she is better for her game tomorrow. We are all planning on going down to watch the games.

Thursday: Today was a double lab day for biology and our teacher has been out sick so we had two free periods which I used to get my homework for tonight done since I knew I was going to the games. My math tutor came after school to help me study for my test next week and then we headed down to the games. Franklin played first and had a great game against Pascack Valley, everyone really played awesome. Franklin now has to play Rutgers Prep in the semi’s.  Bound Brook did not have as good a game and lost to Red Bank Catholic. They started out on a great run, but just couldn’t hold on. After we got home I had to study for a health midterm and then I went to bed.

Friday: I am trying to start running more on my own now, so I ran on the tread mill at home after school. I ran for about three miles and then did some strength exercises with my sister.  After dinner, I went with my brother to his practice and meet up with Coach Kevin to train for an hour. After some ball handling drills we worked on hitting the back board when going up for a layup and finishing. The gym was crowded so we didn’t have a lot of space to work. After training I went over to my friend’s house and hung out with some friends.
Saturday: I had a good long training session with Coach Foderingham this morning.  We did a lot of agility and conditioning and then worked on ball handling. After training I went to my brother’s CYO championship game which he lost, but they were playing an older team. I had to help my mom at the CYO concession stand in the afternoon and then tried to go to the movies with my friend Jessie, but the movie we wanted to see was sold out. We just ended up staying home, baking cookies and watching basketball games with some friends. I have Kentucky winning it all.

Sunday: Emma picked me up early this morning and we headed down the shore again to watch the TOC. We watched Manasquan win the first game and then Franklin played Rutgers Prep.  I cannot believe how great the whole team played and they got the win.  It was an awesome game and I am so happy for them all. It is the first time Franklin has made it to the finals and I really think they are going to win it all. Our ​basketball banquet is tomorrow night, but I think I may have to miss it to go cheer my girls on! I ran again on the tread mill tonight for a couple of miles and then took a shower and am off to bed.
Posted by www.gthingbasketball.com at 1:29 PM