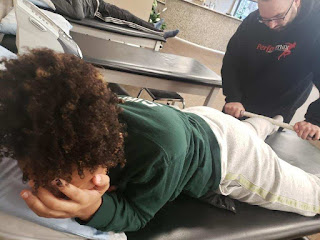 Hello basketball world, I'm back with my week 4 Diary.


Monday 1/20
I woke up today around 6:30 really mad because I stayed up late last night knowing that I had to wake up early to go to Jerry's at 8. As soon as I got to Jerry he was on my case and I was not in the mood. He was yelling at me over every little thing and it was getting me mad. If I wasn’t counting out the made shots, touching my hair, running to get water, little stuff like that was what he was yelling at me about. He made us run like dogs half the time which made me even more mad. The hour was finally up and I had to go to physical therapy to get stretched out. When I go to physical therapy since I have extremely tight hips I get stretched out and my hips massaged and loosened then I leave. But today when I got my hips massaged it was torture. It took all of me not to scream like a little girl so I just quietly squealed and punched the table. After physical therapy I went to Brooklyn to go watch my friend Grace play. Then we picked up some food and went home and I chilled for the rest of the day then went to sleep by 10.
Tuesday 1/21
I woke up at 6:15 and got moving but I was not feeling well at all. At around 6:30 I asked my mom if I could stay home from school and with little questioning of what was wrong she surprisingly let me stay home. Normally I have to be practically dying or lost a limb to stay home from school but my mom let me stay home the whole day. I spent the whole day studying and sleeping which was exactly what I needed and at around 6-7 pm I felt better. I had dinner then went back to sleep.

Wednesday 1/22
I woke up my usual time and got ready for school how I normally do. I got to school 5 minutes before the first bell rang so I had to get to my locker on the third floor and to my 1st period class all in 5 minutes. I walked in the class 2 seconds before the bell rang thank god. The rest of the day went by as usual. I had a science test 8th period that I completely forgot to study for last night and I was a little worried. I answered all the things that I knew first then went back to take my time on the questions that I had trouble on. After I finished with the test I felt pretty good about it but mad because I knew I could’ve done better if I studied last night. After school I hung around for a little bit while I waited for my mom to pick me up. I changed and did my homework then went right back to school for practice at five. We ran a lot during practice after we did our usual drills. Then our coach said if we beat him in a shooting contest, we wouldn’t have to run for the rest of the week and we won. After practice my mom picked me up and we got some Popeye's. When I got home I went right to sleep.
Thursday 1/23
Woke up at my normal time and got to school at 7:40. The day went by really fast surprisingly and it was uneventful. I got my Science test grade and I got a 92 (thank god). After school I relaxed for a while then went to practice at 5. Practice was done at 6:30 so when I got home I played around with my dog for a while, did my homework, then went to sleep.
Friday 1/24
We had today off because teachers were grading regents and finals. I slept in and relaxed for a while. Then at around 2 o’clock I went to my basement and started dribbling and worked on my ball handling for an hour and a half. After that I showered and started getting ready for a party at my teammates house. We watched high school musical for a while and then we eat food. After an hour or so I left and went to see my friend Paris play at Long Island Lutheran, It was Luhi against Riverdale Baptist. Luhi was winning by a lot in the first quarter but then Riverdale Baptist caught up at halftime. At the end on the third quarter, the game was tied. In the beginning of the fourth quarter Riverdale Baptist went on a huge run and there was no coming back for Luhi. After the game I went home to relax and then I went to sleep.
Saturday 1/25
I woke up at around 8:15 and I got ready for my physical therapy appointment. At physical therapy I normally just get stretched and massaged because I have extremely tight hips. When I get massaged it’s like torture. It’s some of the worst pain I’ve ever felt but after all the stretching and the massage, I feel more loose. After physical therapy my mom dropped me off at my school so I can get ready for my game. The game started and they immediately went box and one on me. If I passes the ball it was really difficult for me to get the ball back. But I still managed to keep my cool throughout the game and I finished with 16 points but we lost. After my game we went straight to Jerry and worked out one on one with him for an hour. After the work out I went to the Gauchos gym in the Bronx and watched some games. After the games I went home and went to bed.
Sunday 1/26
I woke up at 7:45 to go to Jerry's at 9. When I walked in my friend said that they didn’t touch a ball at all and he was in a bad mood and they ran the whole time. They were running for a long time then they finally stopped and started doing drills. After their workout was done we started off doing drills and running a little bit but not as much as the group before did but we still ran a lot. After the workout I went to my friend’s house to play 2k and relax then I went back to Jerry's for another workout and we didn’t run as much. After the workout I went back to the Gauchos gym to watch my sister Kateri play against New Hope Academy. It was a good game but New Hope won. After the game, I went home to relax then go to sleep.
Posted by www.gthingbasketball.com at 8:57 AM