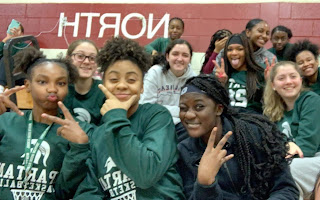 Hello basketball world, this L checking back in with week #2

Monday 1/6
I went to school and the school day went by really slow and boring. After school I watched my team play because we had a home game. This was the last school game I had to sit before I could return to play because of my concussion. The other team was really good and they ended up beating us badly. After the game I went home to do my homework and went to sleep.
Tuesday 1/7
I woke up at around 5:45 and decided to not go back to sleep and got ready for school. I got to school at around 7:40. As usual my, school day was boring except for 9th period because we had a lock down. I was mad though because 9th period is my home and careers class and we were suppose to make and eat french bread pizza but because of the lockdown we had no time and we have to eat it tomorrow. I watched the boys junior high basketball team play and then i went to my grandmas house to chill for a while then went back to school for practice at 7. We had a light practice and we just put up shots and ran plays and we were done by 8:30. After practice I went home to do homework and went to sleep.

Wednesday 1/8
Today’s my first game back and I'm really excited. It’s an away game against a good team so I know the game won’t be an easy win. I got to school at around 7:40 as usual and went on with my day. During 9th period we cooked and ate our french bread pizza which was pretty good surprisingly. After school my coach said that we weren’t allowed to sleep on the bus this game which was a huge problem for everyone because we all usually knock out on the bus. But this bus rise was an hour long so I knew for a fact no one was staying up. I was doing good for 10 minutes but then my eye lids started getting heavy and the next thing I knew, we were at the gym. Luckily my coach didn’t see me sleeping. The JV team played first and they lost then it was varsity’s turn to play. From the first play I knew this game was going to. My teammate tapped the ball too me and right away i got two hand pushed in the back. I was confused a little but because of how hard she pushed me but i didn’t let it distract me. I went for a pull up and I got pushed in the back AGAIN. The whole game the refs were letting the other team do whatever they wanted and they threw the game for the other team. The whole game was frustrating for the whole team and we were all in a bad mood. After the game I went home to study, eat, and go to sleep.
Thursday 1/9
Woke up at my usual time and got ready for school. I got at school at the same time as usual and the school day went by long and slow. I watched the girls volley ball team play and then I had practice right after. We had a really hard practice because we all played bad yesterday so we ran a lot and weren’t allowed to listen to music. After practice I stretched for a while and went to sleep at like 8 because I didn’t have and homework
Friday 1/10
It’s game day and I’m excited because it’s my first home game back. We play Bethpage and they’re really tall and aggressive but that just means I have to shoot more. I got to school at 7:40 and went to English. We watched a Broadway play called West Side Story. It was a good story line but bad actors and bad singing. In social studies we started studying for out final and the same thing in Spanish. We played basketball in gym and then in math we had a quiz. Then I had lunch and after that I had Science then Home and Careers. After 9th period I went to get some food then came back to the school to get ready for the game. When I opened my locker, I realized that I had my home jersey but not my shorts so I called my mom and asked her if she could find them in my room and bring them to me which she did. When the game started right off the jump I got an easy layup and I could already feel we were going to have a good game. We had the lead for a while but then I got in foul trouble and had to sit on the bench for half the second quarter. The other team started pulling the lead away so I had to go back in. We were down by 5 most of the fourth quarter so I had to turn up, but it wasn’t enough. I ended up with 39 points 9 assists and 5 steals (24 points in the 4th quarter) even though we lost by 6, we were all in a good mood.
Saturday 1/11
I woke up at 6:15 to go train with Jerry at 8 and he was on my case off the gate every time I missed a shot. When we heard how much I scored last night, he got off my case a little bit. After Jerry I went to go get something to eat and went to an outlet mall to exchange my Timbs and get some more clothes and then I went back to Jerry. After my last workout I went home and chilled for the rest of the day.

Sunday 1/12
I woke up at around 7 because today is the NYG hoops showcase which I look forward to every year. It’s an all day event off drills, 3 vs 3s, and 5 on 5s. When I got there at around 9:30 I saw a lot of people I knew and began stretching and warming up. Right before the camp started Mike Flynn pulled me aside and told me to put on a show which is exactly what I did. My team started out with drills and then we did a 3 on 3 and it was pretty slow. Then we did our second game of 3 on 3 and I started getting buckets. After the 3 on 3 my team went on a lunch break. Me, my friends, and our parents walked to a pizza shop and ordered our food but they were taking mad long to make our pizza. When one of my slices finally came out the oven it was scorching hot but I had to hurry up and eat it while walking back to the gym because we only had 30 minutes and we were late. When we got back go the gym it was my team’s turn to play 5 on 5. I was playing for fun majority of the game making fancy passes and I did a between the legs layup and a 360 layup. I played another game after that which was another fun game then it was time to go OFF in the all star game. Me and my friend Mari were going at it and we couldn’t take each other seriously. The whole event was really fun and I had to make sure I thanked Joe (the camp director) for everything.

Posted by www.gthingbasketball.com at 5:53 PM