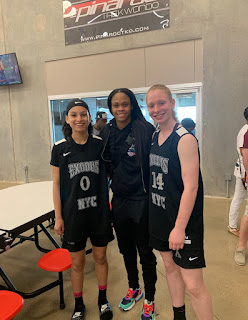 Hello to all the ballers out there, welcome to week 5 of my diary


Monday - Today was the beginning of state exams at my school. I chose to opt out of the exam since I am going to private school . Since I opted out, I get to just hang out with my friends and have snacks, which is a nice break from all the work we normally do during the day. After school my dad and I went to the mall. He has a trip to get ready for and I am going to Dallas at the end of the week to play basketball so I have some things to pick up as well. We had a good time just the two if us.

Tuesday - Usual morning routine of getting ready for school and driving with my mom. Today was another chill day at school because of the state exams. After school I went to get pizza with my friends. My mom picked me up afterwards and I went home to get ready for my workout. I met up with my teammate Riley at the workout and we had a lot of fun. Coach asked me to shoot the free throw to end the session and if I made it we could go home and if I missed we had to run. I missed and so we had to run. He asked another kid to go and he missed also. Finally Riley shot the free throws and we were able to finish. Riley's mom made chicken and garlic bread and brought me some to eat after the workout. We got home kind of late, so I just cleaned myself up and went to bed.


Wednesday - I had another free day at school today which was really nice. I went to the HUB after school to watch my friends play basketball while I waited for my mom to pick me up. I forgot to pack basketball stuff so I couldn't play. When I got home I did the dishes and cleaned up my room. Afterwards, we went to meet up with Riley. Her local team had rec games and they asked me if I could play. I played 2 games with them. It was a lot of fun because I was able to play with Riley who I haven't played with in a while. It also helped us get ready for our trip to Dallas. After the games we went home to finish packing for the trip.

Thursday - Woke up SUPER early today for my trip to Dallas. My mom couldn't come with me so I am flying in with my coach and the EYBL teams. Some of the girls were with me last spring so we are good friends. Once we got to Dallas we went to get food and then headed to Texas Christian University for a tour of campus. It was so nice. I loved it, I told my mom later that I would love to go there. After the tour we went to buy a basketball because we found out there was a hoop at the hotel. We spent time playing 1v1 with some of the older girls before dinner. We had a dinner at a local BBQ place. It was delicious. I called my mom before bed to let her know I missed her and how much fun we had.

Friday - Today was our first day of games. We went to the gym early to watch other teams play. Riley and I met Mariah Jefferson from the WNBA Aces, she used to play for Uconn, it was really cool. There were a lot of college coaches and good teams. We played our first game and we did really good overall. We won, and I was able to score more than usual. Riley had an awesome game. It was fun to play with my old teammates again. Our second game we played hard, but couldn't get the win. The games were late in the evening and so we just ate and went to bed afterwards.


Saturday - Today we woke up ready to play our last two games of the tournament. For some reason, my legs felt so heavy and tired. I ended up missing a lot of shots, which was a bummer because we lost the game. It was still a good game though. I noticed that the TCU coaches were there watching, I hope that I was able to leave a good impression with my overall performance. Everyone always says its not just about scoring, but what you bring to the team overall. The second game I played much better. I scored the most points I have ever scored in a game. I played hard and was not afraid to take chances. My coaches this weekend made me feel really confident and let me play through my mistakes which was awesome. I felt supported and so thankful for the opportunity to showcase this weekend. After our games we watched the EYBL teams play.

Sunday - Travel day, Had to wake up really early today. I waited for Ms. Ruth at the lobby of the hotel and we went to the gym to watch the EYBL teams play there final games before we got on our plane. We found out after the games that the flights were delayed. Which was fine because we got to take a nap. The plane ride towards the end was scary because of a thunder storm. It rained hard for a bit and we could see lighting. My mom picked me up and it was really nice to see her. We got home very late and I went straight to bed.


Posted by www.gthingbasketball.com at 6:28 AM