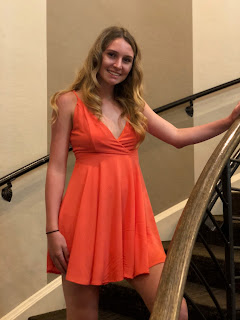 Monday August 13th: Today I stayed inside during the day and caught up on summer reading work and math work. Then I went outside and worked on my vertical for about 20 minutes. Later on I went to workout at Roselle Catholic. We worked on 3 on 3s and ball handling.
Tuesday August 14th: Today I went to US hoops from 11:30 to 2 and worked out there. We did mostly game play and touched on ball handling. After that I went home and showered and then went to watch some games of the No Boys Allowed tournament. When I got home I cleaned my room and packed for the beach tomorrow.
Wednesday August 15th: I woke up at 6am today and was on the road by 7 to Ortley beach with my family. We got there around 8am and for the rest of the day we played out in the sun and swam. Me and my brother Brady played frisbee and surfed the waves with boogie boards. For lunch we ate cheeseburgers and snacked on chips and salsa. We left around 4 and I rushed to make a workout at 5. I was a little late but I still got to do some drills and get a sweat going.
Thursday August 16th: Today I went swimming with my brothers and cousins. We played games and ate lunch. After lunch I went home and put some shots up. Then I went to the basketball warehouse for a workout.
Friday August 17th: Today I spent 45 minutes on working on my vertical jump with a series of different exercises. After that I shot. Later on in the day I had a friends birthday party. I went to her house around 6 and stayed until 11. I swam in the pool and sat in the hot tub until a storm came in and we had to get out. Then we sat in the house and played different card games like apples to apples. We had ice cram cake which was delicious and pie.
Saturday August 18th: Today I woke up at 6 am to workout at 7am with the basketball warehouse. On Saturday mornings they run pick up games and I played for about an hour. Then I went home and spent another 45 minutes working on my vertical. Afterwards I shot for about 30 minutes. Then I spent the rest of the day relaxing and resting up.
Sunday August 19th: Today I woke up and had my dad drive me to Bishop Ahr to do some sprints and other stuff uphill. We also did a bunch of core work. After that I came home and go ready to go to my cousins birthday party. They are turning 8 and they had everyone over to celebrate. We went swimming, played baseball, and had cake.

Posted by www.gthingbasketball.com at 9:53 AM