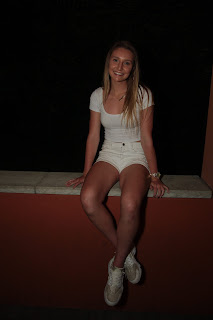 Monday August 20th: Today I spent outside in my back yard working on moves to the basket and shooting. It was a super nice day, so I enjoyed it. After a couple shot series I jumped in the pool to cool off. Then I came inside to shower and watch some Tv and ice my knees.

Tuesday August 21st: I went on a visit to NJIT today. We walked around campus and saw the arena. It was a great experience and I learned a lot about the school. I also found the maker space place super interesting, it has 3D printers and everything. After I got home from there I worked out at the basketball warehouse.

Wednesday August 22nd: Today I went outside and spent an hour on my shooting. Then I jumped in the pool and relaxed a bit before my game. I had a game for the No Boys Allowed League. I am playing on the home team which is a bunch of girls combined from different high schools to form the team. We won our game by a good number and had a good time playing the the girls.

Thursday August 23rd: I went to workout at US hoops today in the morning before my doctors appointment. I worked on moves to the basket and got a ton of shots up. Then right after my doctors appointment I went to Bishop Ahr to use the hill by the softball field to get a conditioning workout in. After that my friends called me from the park and asked if I wanted to join in on some pickup games and of course I said yes. We got a lot of games in but I had to use a boys ball since I was the only girl. When I got home I turned on my garage light and shot outside with my brother for about two hours. It was a very tiring day.

Friday August 24th: Today I went to the park to play pickup again for about 2 hours. Then I had one of my friends rebound while I got some shots up. When I got home I took an ice bath because I was sore from yesterday and watched some Tv.

Saturday August 25th: Today I had another game for the No Boys Allowed tournament. We played Franklin and lost by 8 points. It was a very competitive game and I had a lot of fun playing against my aau teammates. After the game I came home and did some conditioning workouts to strengthen my lower body. I cooled down by jumping in the pool. Later I went to my brothers football game. They held the other team to 0 and won by a ton. I’m very proud of them.

Sunday August 26th: Today I went to the basketball warehouse to workout in the morning. Then I went out shopping for a nice white shirt to wear to my friends sweet sixteen party. The party was very fun with great food. I hung out mostly with my aau team but I got to see a bunch of people I went to middle school with.

Posted by www.gthingbasketball.com at 9:39 AM