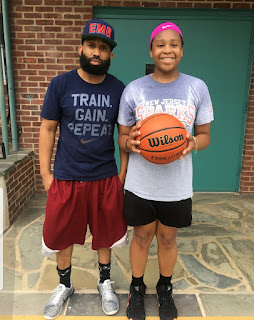 Hey, this is Zoe Brooks (aka Baby Storrs and The Bully) and this is my final Gthing diary entry. I would like to thank Gthing for the opportunity, and I hope you enjoyed taking a small peak into what I do on and off the court.
Monday, June 11
This week I had my finals in math and science. After school, we drove from Plainfield to Maplewood to pick up one of my friends Ciera and give her a ride to St. John Vianney Camp. There was a lot of traffic so we were late. My Sparks teammates Mikaela and Gabby met us there and the four of us had a really good time.
Tuesday, June 12
Today I had my social studies and language arts finals.
St. John Vianney is one of the top high schools that I’m thinking about going to in ninth grade. The best part of this camp is seeing all of the championship banners hanging up in the gym. Also, I got a chance to hang out with Coach Dawn Karpell and I like her a lot.
Wednesday, June 13
Happy Birthday Dad. Today is my dad’s birthday. We made my dad cupcakes and gave him cards and gifts.
Madison St. Rose, who also plays for the Sparks and is going to go to St. John Vianney next year, is also at the SJV camp. The camp is competitive and I think it’s cool that there are so many Sparks there. We learned a lot and had fun.
Thursday, June 14
My mom got me a new dress and shoes to wear to my cousin Tasha’s wedding. She had a beautiful wedding and it was nice to see my family including my grandparents and my other cousins. Afterwards, we went to the reception at Galloping Hills Inn and we had a good time eating and dancing. Congratulations Tasha.
Friday, June 15
SJV camp is over so I finally got to go put in some work with the best trainer in the state Eric Myrick. I’ve been working with him for four years and he has helped me become a much better basketball player.
Saturday, June 16
My Sparks team played up a grade at the Shoreshots Tournament. We played the Shoreshots in the first game and although it was a tough game, we came out on top. We didn’t play our best game but we got it done. We don’t play in New Jersey too often so it was kind of cool to see so many local high school coaches and players that we knew in the gym. In the second game we played a team called the Aces and I had a quick 18 points before sitting out the last 10 minutes of the game because we were winning by so much. After the game me and my parents went to Benihana’s to grab something to eat.
Sunday, June 17
Today is Father’s Day so me and my mom took my dad shopping at Menlo Park mall. We got him some Jordans and clothes and then my mom made him his favorite dinner which is steak.

Posted by www.gthingbasketball.com at 9:11 AM