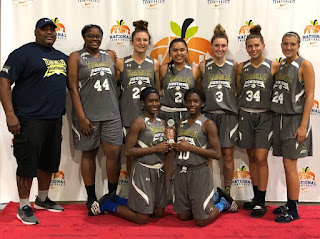 Hey this is Emma Boslet from Team Miller 2020, welcome to my diary!
Monday July 23: I had a game at 9am and 11am, we won both. After the games I went out for burgers with my family. Then we went on a ferris wheel outside my hotel and then walked downtown. We met up with some of my team and went to a candy store and I got a bag full of gummy everything- bears, robots, snakes, worms. After walking off the candy and resting in the hotel for a while I went back out with some of my teammates to walk around downtown, get Ben and Jerry’s ice cream and watch the sunset by the river.
Tuesday July 24: Today I had a game at 8 and 11 and we won both to place first in our pool. Then I relaxed in the hotel room and watched That 70’s Show. Then I met up with my team and we all went to support the 11th grade Team Miller team. It was such an exciting game to watch, they ended up winning by one. By then it was dinner time so some of my teammates and I went to a bbq place downtown to eat.
Wednesday July 25: Today was playoff and championship day. We had a game at 10:40, 1:30, and 5:20. The first two were playoff games that went well, my team competed and fought the whole game for a win. The championship game was a real battle. Not until later in the second half could we break being down by 11. We made a big comeback and with a minute left was only down by two points. We ended up losing by four but it was a great experience and a fun tournament. Right after the game I tried to get in the car to drive home right away because I have a flight tomorrow at 8am out of Philadelphia so I have to be out of the house by 4:30am. I got home and put a load of wash in and repacked my suitcase. I’m excited to start the tournament in Atlanta.
Thursday July 26: Today I woke up at 4:30 to drive to Philadelphia airport; which is an hour away, to fly to Atlanta. Once we got settled in the hotel, my Dad, my brother, and I went down to look for lunch. We are staying in the Omni Hotel which is attached to the CNN center so it’s really cool to be able to see. After lunch I went out to walk downtown with some of my teammates. We got some Smoothie King and relaxed by the many statues and fountains of Centennial Olympic Park.
Friday July 27: Today I had 2 games to start off the tournament in Atlanta. We lost the first to a very talented team from West Virginia and won the second. After the games we went out to eat at a sports pub downtown. It was all about baseball and it had a pitching speed tester which some of my teammates and I tried out. Let’s just say.... I’ll stick to basketball. Anyways later we walked down main street and got to pet horses. We also got a ride in a carriage with a horse pulling us and it really made my night.
Saturday July 28: We only had one game today and it was a very close battle. We ended up losing by 4 and we placed in 3rd for our pool. After the game we all rested in the hotel and ordered in. Later that night we decided to do some team bonding with an escape room, we had 60 minutes to escape a haunted room.  We escaped after unlocking what seemed like a million locks. When we arrived back at the hotel, we weren’t that tired so we all sat around this huge piano. My one teammate started to play a song and we all sang along entertaining the lobby. Another team and other people started walking over and joined the fun. Tomorrow we start playoffs for the 3rd place bracket.
Sunday July 29: Today was playoffs and championship day. Our first game was very close and we won by only a few. Our second game was also close but we were able to maintain a steady lead. The championship game was competitive, however we kept a 20 point lead for most of the game. My whole team was on fire shooting the ball and we played really well as a team. We kept composure through various technicals and they even had to switch the officials at halftime. We placed 3rd for our age group and won the silver. I’m very proud of my team and excited to get a couple days off since live season ended.


Posted by www.gthingbasketball.com at 6:45 PM