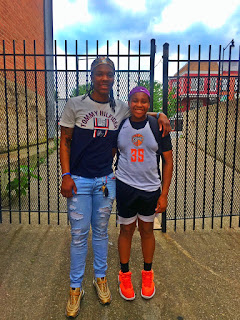 What’s up basketball world? This is Zoe Brooks. I’m a 5-foot-7 guard for the 2023 New Jersey Sparks and here is what I’ve been up to.
Monday, June 4
I went with my dad and brother to JP Stevens High School so we could do sprints on the turf football field. When we got done there we went to Lifetime so I could shoot around. My dad and brother were begging me to play against this 15 year old boy that was there so I did. After I won we went home so I could watch Super Girl.
Tuesday, June 5
Right after school I went to Hoop Heaven and worked out with a varsity high school coach and a college sophomore. One of the main reasons I like these workouts is because everything is a competition. After an hour and a half I went to my trainer Eric and did another workout. My legs were done afterwards.
Wednesday, June 6
I had a session with my math tutor after school to help get me ready for my final. I took a quick nap and then went to my trainer Eric. After training I went home called my friends, ate dinner and then went to sleep.
Thursday, June 7
One of my best friends Ciera went to Eric today so that made training a lot more fun. We goofed around after training for a little bit, but it was cut short because she stayed for a second class.
Friday, June 8
For the first time all week I had a day where I didn’t touch a basketball. After school, I went for a long walk around the neighborhood and then I got packed for our trip to Washington DC for the Rising Star Challenge.
Saturday, June 9
Early in the morning the head coach for the Howard University basketball team spoke to us. Then two assistant coaches took our Sparks team on a tour of Howard. It’s a very nice campus. We took a lot of pictures and learned a lot about the school. Later we blew out NOVA and Lady Prime and our entire team did really well. Myisha Hines Allen, who used to play AAU for the Sparks and is now on the Mystics in the WNBA, sat on our bench and took pictures with us after the NOVA game. After our wins, I went to Virginia with Gabby to visit her grandparents.
Sunday, June 10
Me and my family got dressed and went downtown in DC to get something to eat and do some quick shopping before my championship game. We played Team Takeover in the chip and they always give us a hard game. We only had seven players and the gym was hot but we were able to come back in the second half and win the game by four points. My jumper was off but I was able to get to the cup and I scored 26 points. After the game we took pictures with the championship tee shirts and then we all got on the road and headed back to New Jersey..


Posted by www.gthingbasketball.com at 2:51 PM