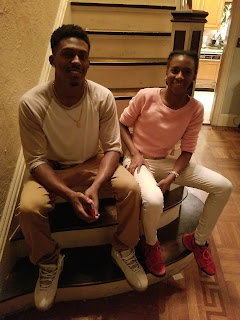 I went to school. It was a good day because we have been preparing for the Christmas pageant and the Christmas sing along. It’s hard to believe it’s Christmas already, it’s like these last months have gone by in the blink of an eye. Today, we exceeded our goal for our gift collection. Throughout November and December my class has been collecting gifts for kindergartners at a elementary school in Staten Island. We collected 150 brand new gifts. Some of us also volunteered to gift wrap the gifts. We gift wrapped all 150 gifts. On Thursday the kids are supposed to be coming to our school to open their gifts. After school I went to the gym to workout. It was a great workout. I also had a chance to play against some of the boys. Many of the boys are in high school and had just gotten out of practice. We were going hard. My team won all the games.

I had a full day of school. It was an okay day. After school I went to workout with my trainer. The workout was challenging which was good. I went threw new and different drills. When the workout was over I headed home. Throughout the workout I was feeling a little sluggish but I dusted it off and kept going. When I went home I was so tired. as soon as I got through the door I went to the table and just rested my head for about 10 minutes. When my mom got home my mom and dad felt my neck and my forehead and both said I had a fever. So when we took my temperature with the thermometer it had turned out that I had a 102 degree fever.

Wednesday and Thursday were not great days both days I spent the entire day in the house. On Wednesday my fever was still 102 degrees. By the end of Thursday my fever had went down back to my usual temperature. It was awful being sick my head felt bad. On Thursday my brother came back from college which was great. It was nice to see him and be able to spend time with him again.

I was feeling better. I had a half day of school so I decided to go. The day went by fast because it was short. When school was over I went to the gym. After the gym I went home to relax because it had been a long day especially since I was just getting over being sick. I spent the rest of the day relaxing. Some of my friends went ice skating but I couldn't go because I did not want to do to much since I had just been sick the day before.

I thought everything was going to be a nice and cool day. When I got up my left eye was closed shut. My mom took me to the doctor and  the doctor said I had conjunctivitis or other known as pink eye. I had just gotten over being sick and now I was sick again. The doctor gave me a prescription for eye drops to help heal it. It was frustrating because I wanted to hit the gym to go and play some games and get some shots up but instead I had to take it easy again. I went to get my hair done and my brother came with me because he wanted to get the tips/end of his hair died like a light brownish color. When it was done his hair looked nice. The we went home. I had a game and I really wanted to go but my parents wouldn't let me because within the first 24 to 48 hours pink eye is contagious. So instead my mom took me to this thing called the hip - hop nutcracker. It was a good show but it was kind of odd to see a story told without words. It was based on modern and hip hop dance but they moved very smoothly. My mom and I had a great time.

Sunday, I got up early to go workout with my trainer. It was a good workout that worked on both my shooting and off the dribble moves. I worked out with the high school boys again. It was good to go workout with the boys.  It a good way to challenge myself and stay sharp. We got alot of shots up and worked on finishing around the basket. After the workout, I went to get something to eat then went home. I still was not feeling very good. My family and I left the house surprisingly early to go to the movies. We were going to see Star Wars. Star Wars:The Last Jedi was a great movie. It was action pact and was interesting. It was longer then I expected it to be but it was still  very good.
Posted by www.gthingbasketball.com at 2:01 PM