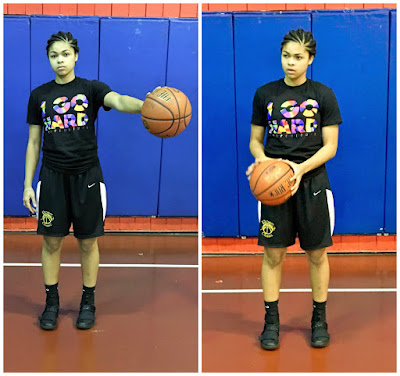 On Monday; Since I'm attending a Catholic School (The Mary Louis Academy) Halloween is no longer a standard school day, so I spent the day at home. I'd been working out a lot, so I decided to rest my body and enjoy the day. If I had a gym to go to, believe me, I would've been there, but the rest days are critical to staying fresh and enjoying every minutes you spend getting better. Most of the day was spent watching Netflix, talking to friends via face time and text; I spent the rest of the day playing with my dog. In the evening I ran the steps of my building, conditioning workout I do once or twice a week, especially since it's getting colder. Before I did stair work, I begged my concerned mother to let me out of the house for about 10 - 15 minutes so I could work on my ball handling. Luckily my mother realizes how important improvement is to me. I finish the night with exercises to strengthen my hip adductors, after which, I stretched my abductors.

On Tuesday; November 1st marks All Saints Days and Catholic School, students are granted a day off. I thought I should take advantage of these opportunities to rest, who knows how many of these I will get during the season. I did my exercise to strengthen my adductors, core exercises and shadow dribbling on the day. I finish the night off watching a show called the "The Following." The show was introduced to me by a friend recently and I've been hooked ever since. The show keeps me on the edge of my seat. In one of the episodes, there was a massacre on a train in NYC, I take public transportation everyday. With that being said, you can imagine how frightened I was as I walked into the train station  Wednesday morning.

Wednesday; Today I received my physics test back from the week before, I was the only one to get a 100% on my test. I like to keep good grades under wraps, but somehow it managed to get out. Since then some of my classmates have asked me to tutor them. I was able to get back into gear, I don't sit well with too much rest. While I'm resting, someone out there is improving. I did push-ups, core, and a timed conditioning exercise, played a game of 1 on 1 against my god brother, shot in the park as well as in the gym after a special event earlier in day. My teammate, Danielle Patterson's verbal commitment ceremony to the University Of Notre Dame. I, along with her family, the coaches and sizable portion of the student body and administration gathered in the gym to share this special moment with Dani. It was truly a memorable experience especially hearing the eruption of the crowd when she unveiled her Notre Dame shirt. I imagined the thrill of committing to the school of my dreams. I was very proud to share the moment with her.

Thursday; It was an ordinary day. I conditioned, dribbled, did calve work and exercises to strengthen my adductors, push-ups and core. Overall, it was a very productive day.

Friday; I was lucky enough to a have gym, and but up lots of shots. At Mary Louis, the entire team gathered in the gym and shot for a hour or so. Later that evening I had a tough shooting and conditioning workout with my first ever coach. There, we worked on a lot three's on the move as well as polishing moves into a pull-up. It always feels good when you have people around you that believe in your abilities and want you to succeed and be at your best.

Saturday; There were tryouts at school, I made the first round of the cuts, but it was also family day. When I got home from tryouts I was welcomed by family laughter and the aroma of great food. A little later,we packed into the car and headed to Brooklyn for my playoff game in the Rose, After A tough battle, we didn't come out on top. Every experience is a learning experience, this loss was no different. My teammates, coaching staff and I recognize that we still have things to work on before the season starts, but there is no doubt in my mind that we will be ready when the time comes.

Sunday; Today I got up early to wash my hair and get it braided over. The remainder of the day will be spent studying, getting myself prepared for the coming week and strengthening my core, legs and arms, the game waits for no one.....


Until we meet again,

Posted by www.gthingbasketball.com at 8:10 PM