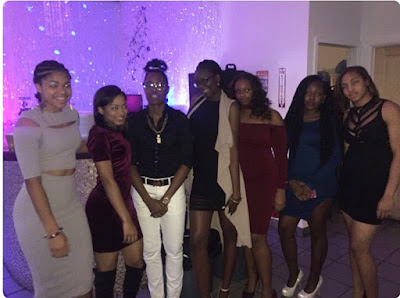 Hey Basketball World, glad to have you back for week 3! I'm having a lot of fun sharing my whereabouts with you and giving you a little bit of insight into my life, the life of a female baller.

Sunday; I slept a lil late since its the weekend and since preseason is officially over, it's all about maintaining strength and growing as a player and person for the duration of the season. Today I decided to do core and calve work; I didn't want to do anything too strenuous because Monday marked our first practice.

Monday; The school day consisted of lots of note-taking as well as a history test, a test for which I prepared well. Aside from that today was considered my first official high school practice. Considering the caliber of my former high school team, I understood that Hilltopper practices wouldn't move at the speed that was formally accustomed to, but much faster. I understood that I would be challenged in all aspects: learning new plays, playing against girls who know how to play as well as familiarizing myself with the expectations of the team and my coach etc. Overall, day 1 was productive. We worked on transition and offensive concepts, amongst a few other things. Afterwards, the team and coaching staff sat down to set the guidelines for the season over an Italian dinner. Since Kania Pollock, a close friend of mine, and I were the only two transfers on the basketball team, we were brought up to speed with what being a basketball player at Mary Louis entails. I, and Kania alike, were excited about this upcoming season given the limited opportunities we had in our first two years of high school. When I finally arrived home after practice and the player's meeting, I completed my homework and did my core exercises before bed. The 5:45am wake up is a killer when i stay up too late.

Tuesday; We have practices everyday except for our scheduled off days, which vary each week, but we only work with the strength and conditioning coach twice a week as opposed to three times a week. We had strength and conditioning from 4:00 to 4:45 and practice from 5-6:30. Delegating time for the team to train with a strength and conditioning coach in the weight room was new to me upon starting school at Mary Louis, so having practice as well as a strength session was quite unusual. Today was upper body day; nothing about shooting the ball was easy for the first 20 minutes of practice. After Day 2, I went home and completed my usual exercises for core, calves and hip adductors. I also took an ice bath.

Wednesday; Today was a relatively standard day; I completed my regimen: practice, core, calves, push-ups and adductor exercises. I did some studying and talked to my mom for awhile, which I do everyday. We watched some NBA and I finished the night on the phone with my school chums until I fell asleep.

Thursday; Today was strictly a practice day. After putting in a few offensive sets on Thursday, we started to look more fluid during practice. The energy level remained high as well, so it was good day.

Friday: Veteran's day; TMLA was closed, so we had an early morning practice at St Clare's, so I was up at 6am to get on the train to head to queens. We worked on our offense, fundamentals and communication on the court. My friends were headed to the mall but I had to head home. I spent the rest of the day with my mom running errands and gathering some last minute touches on my outfit for a friend's sweet sixteen the next day; I copped a pair of cute heels. I was super excited for the party.

Saturday; Again, we had an early morning practice and focused on the same concepts we had over the course of the week. I was able to spend the rest of the day with my family until it was time to get ready for the party. My cousin was also having a baby shower in Brooklyn that I unfortunately missed but, this was chill time outside of school, I couldn't miss it. It was the first sweet sixteen I'd ever attended; I had a blast. I took a lot of pics, laughed a lot, enjoyed the music and watched my friends dance. Luckily, we were given a rest day on Sunday, so I didn't have to worry about getting home early. ;)

Sunday; I chose to enjoy my scheduled off day, but I made sure to do my core exercises, calve work, dribbling and push-ups. It was basically a lazy Sunday as we straightened up the house did laundry and laid around the house. I watched "The Following" and completed some homework last minute.

Until next time... Signing off. :)
Posted by www.gthingbasketball.com at 4:03 PM