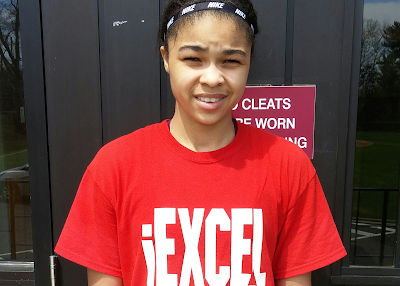 My name is Jordan Nixon, and I would like to welcome you to my first week of a "Diary Of A Female Baller", I would like to thank Gthing Basketball for this great opportunity and allowing me to display what go's on weekly in my life and what it takes to become a perfect athlete and student.

Monday I did some strength and conditioning (arms) and core. I also did a little dribbling for 15 minutes, worked on my form, leg squeezes, and got a ice bath to relax my body.

Tuesday I had a history quiz, not to sure how well I done. After school I did some shooting for about 45 minutes, leg squeezes, 8 sets of stairs exercise (two sets hitting every stair) core, 10 minutes of shadow dribbling and shooting plus push-ups to finish it off.

Wednesday Did some more strength and conditioning (lower body), leg squeezes, and dribbling for 10 minutes, half push-ups and but no core this time. Ross (pull-ups and catch and shoot.

Thursday After school I did some dribbling, 10 minutes of dribbling, Free throw shooting (mainly worked on my form), did some more form practices. push-ups (2 sets of 15 and 4 sets 14), and core.

Friday Was busy for me, it started with a math quiz first, then I learn that later on in day I was going to have a English quiz and a Physics quiz back to back (Like Drake said), after school I went in did some arms and strength and conditioning, leg squeezes, Preston, no core this day, thank god.

Saturday I went to Prospect Nations Keil Moore Event KM Fall Showcase in New Jersey, worked out with Keil and some other good trainers that were there. We worked on mastering the one dribble pull-up they also through some conditioning in it as well.

Sunday was playoffs at the Rose Classic in which we had a game, afterwards I did a few push-ups and did a little core work.


Until next time, Jordan Nixon signing off!

Posted by www.gthingbasketball.com at 9:50 AM