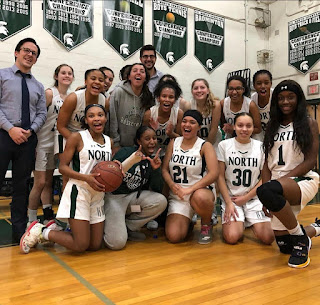 Hello basketball world, this is Lauryn checking back in with Diary #6

Monday 2/3
I woke up really early today and couldn’t go back to sleep so during 1st period since all we were doing was reading, I took a 15 minute nap because that book was putting me to sleep. I was feeling confident about our game today considering we had the home court advantage and the refs wouldn’t cheat us or throw the game for us like they did the last time we played this team. As the day went on I got a lot of homework and I had to do the majority of it during my lunch period and I barely got eat and I was starving by the end of the day and I went to get food with two of my teammates. When it was time for our game I got a lot of shots up during warmups to make sure I was hitting shots during the game. The game started off good and we were in the game within the first quarter as usual but the rest of the game went downhill. The refs were awful just like when we played them at their gym. They called on the floor fouls so I couldn’t shoot free throws even though I was obviously shooting and they wouldn’t call any fouls for me when I was getting pushed in the back but I made sure I didn’t say anything to the refs so I wouldn’t give then a reason to give the game away for us. Within the fourth quarter it was obvious how the refs were moving and there wasn’t anything we could’ve done. We lost the game by like 15 and the whole team was upset because of the reason we lost. I thought about the game for a while reflecting on the game and what aspects I could’ve done better in and I realized all things were in my favor. There wasn’t anything I could’ve done better. My shot selection was really good, my shots were hitting for the most part, and I wasn’t fouling but the refs were killing us. I’m not one to blame a lose on refs but that game was blown for us just like the other time we played them. I went to bed feeling good about myself knowing that I did all I could in that game.

Tuesday 2/4
I woke up extremely tired and i didn’t feel like spending a lot of time picking out an outfit so I just threw in the first shirt I found and put on some black jeans. I don’t like going to school when we don’t have games because the days just feel longer and they’re uninteresting. After school I went straight home then came back to school for a light practice of going over plays the went home and went to sleep.

Wednesday 2/5
Today we play against Bethpage who has to win this game in order to make the playoffs. Last time we played against them I had 39 points and we still lost. I woke up this morning with a fever and a stiff neck. I felt terrible but I had to play. My mom let me sleep in to see if I felt better but by 12 I felt worse but I had to start getting ready for school or I wouldn’t be able to play later. It took me way longer than usual to get ready for school and I got there half way through sixth period. I hadn’t eaten all day and I had lunch next period but all I did was sleep. Eighth and ninth period went the same way. I was half dosed off the whole time and sweating a lot because for some reason it was extremely hot in school. After school ended I went straight to the locker room to change and took a little nap. I went to the nurses office and checked my temperature and I still had a fever but I didn’t care. I was knocked out the whole bus ride and took every pill or medicine you could possibly think of. When we got to the gym I had put something in my stomach because it’s been empty the whole day. I forced myself to eat two bags lf Doritos and took some DayQuil which didn’t help at all. During the jv game I did my homework and relaxed. I had a good warmup but I was still feeling a little sluggish. When the game started and I got my momentum flowing the sluggishness started to go away but I started to feel really cold. We were in the game the whole time but by the fourth quarter I ran out of gas and had no energy left. We ended up losing the game by like 10 but I knew that if I was at my 100% we could’ve won that game.

Thursday 2/6
I woke up half dead. I knew there was no way I was going to be able to go to school even if I tried and I guess my mom was thinking the same thing because she didn’t even bother to wake me up. I slept in for a while but then had to throw on some clothes because I had to go to Jersey to get my hair braided for made hoops this weekend and then go to practice at 6. When I get to practice I know that it’s going to be a light practice so I wasn’t stressing anything but I was sweating like crazy. After practice I went home then went straight to sleep.

Friday 2/7
I had to wake up at 4 a.m. to drive down to Boo Williams in Virginia for made hoops this weekend. I was feeling a little better but I was still sick. I slept half the car ride but it was still extremely long. We got there at 2 and we were staying at my sisters apartment. I relaxed for a while and took a nap but I was extremely bored because there was nothing to do. It was rough going to sleep because it was really hot in the apartment and I had to share a bed with my sister but I eventually fell asleep.

Saturday 2/8
I woke up at around 8 to go to Waffle House because that’s my favorite thing to eat when we’re down south since we don’t have them up north. After Waffle House we took an uber to the gym and watched some games then got ready for mine. Our first game was easy and we beat the team by around 30. Our second game started off rough but we won by around 15 and our third game was an easy win. After the games we went to eat chipotle then I went to the apartment and relaxed and watched a movie then went to sleep.

Sunday 2/9
I woke up at around 7:30 to take my time to get ready for my game. I had pancakes for breakfast which always makes me happy. When we got to the game I knew it was going to be a tough one but when it started we took the lead easily. At one point we were up by 14 but the other team went on a crazy run and it was a close game. We ended up losing in a double overtime and blew our 14 point lead. After the game we started our long journey home which felt longer because of the L we just took. After a long 7 and a half hours I got home and went straight to bed.
Posted by www.gthingbasketball.com at 2:35 PM