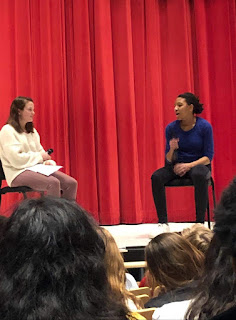 Hello Basketball World, I'm Back With My 5th Week Of My Diary.

Monday - Today my team and I headed back to school from our long weekend in New York. We left Long Island at around 10 or 11 and got back to school at 2:45. We then had practice from 3:30 to 5:00. For most of the practice we conditioned by running sprints and going through various workout stations. Before heading back to my dorm, I ate dinner with the team. Later, I showered, unpacked my clothes, and completed my homework for the rest of the night.

Tuesday -  Today I woke up and went to the gym at 6:30am with a teammate. We worked on shooting around the perimeter, focusing on our side step and step back. Today for school I had a full schedule with all my subjects. My most enjoyable classes were Calculus and History. In Calculus I had received a test that I had taken last week and scored a 96 percent. For the rest of the period, we discussed the recurring mistakes people made on the exam. In History, we began watching another film on the condition of the North and the South as they prepared for the Civil war. Following school, I headed to practice from 3:30 to 5:00. Tomorrow is gameday against Pomfret so we focused on our offensive sets. Following practice, I went to dinner before heading back to my dorm. To finish the night, I showered and then completed my homework.

Wednesday - Today I only had three classes; Chemistry, History, and Biology. In Chemistry, we introduced a new topic of quantitative relationships of reactions at equilibrium. In History, we continued the documentary that we started on Tuesday regarding the division of the North and South before Civil war. In Biology, we further explored our individual topics that we chose for our final exam. My research is Cystic fibrosis and the specifics on this genetic disorder. Following class, I got prepared for my game against Pomfret at 3:15. We ended up winning 49-45 and I had 21 points. Following the game, I went to dinner before heading back to my dorm. I did not have that much homework tonight, so I just watched some shows on my computer.

Thursday - Today, similarly to Wednesdays, I only have three classes; English, Biology and Math. In English we finished Moby Dick and wrote an essay analyzing the ending of the book. In Biology we continued are research on our genetic disorders. In Calculus, we worked on  AP problems that would show up on the AP exam in the spring. Following school, I headed to practice. We focused primarily on our offense against a zone defense. Before heading back to dorm, I had team dinner. To finish the night, I showered and then completed my homework.

Friday - Today I had a skype lesson with my Spanish tutor, Miriam. We focused primarily on reflexive verbs and subjunctives. Following my lesson, I had Chemistry. In class, we further discussed the ratio of products and reactants in an equation and how that affect the equilibrium constant of the reaction. After Chemistry, I had Calc and English. In Calculus, we continued looking over various AP problems that could potentially be on the AP exam in the spring. In English. We further discussed the ending of Moby Dick and how that will affect our final projects. After school, I headed to practice. Tomorrow is our last regular season game against Middlesex. During practice, we focused on our offensive and defensive sets. Following practice, I went to the dining hall to eat before heading back to my dorm. I did not have any homework, so I watched shows on my computer for the rest of the night.


Saturday - Today we did not have classes because it is “Middlesex weekend.” Middlesex is SG’s rival and every year the last game of the season for all sports is dedicated to beating them. Our game was at 3:30 and we won 51-42; I had 20 points. Following the game, I went to the grocery store before heading back to my dorm. To finish off the night, I showered, did some homework, and watched TV in our dormitories common room.

Sunday - Today I spent most of the day preparing for a Q & A that my school was hosting. At SG, we have a committee called the honor board which serves as a discipline council that decides the consequence for a student when the have disobeyed our honor code. I was one of the 10 nominees in the running for one of the five honor board positions. At 6:35pm, I had to answer two questions regarding the importance of the honor board in the community. Overall I believe I did well, but will not know if I won until Friday.
Posted by www.gthingbasketball.com at 5:03 PM