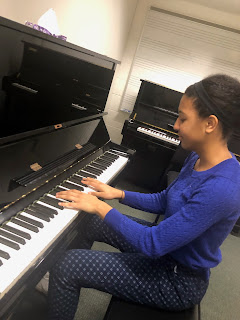 Hello Basketball World, I'm Back With The 3rd Week Of My Diary.

Monday - Today I woke and was not feeling well. I spent most of the day in the health center and left around 4:45 pm. At 5:00 I watched my basketball practice, while completing the homework that I had for the following day. After practice, I went back to the health center to get more medication and went to bed early.
Tuesday - Today I woke up feeling more energized than Monday. On Tuesdays, I have a full schedule so I tend to be very busy.. The classes that I enjoyed the most today were AP Chem and English. In AP Chem, we reviewed for our upcoming test on rate law expressions, solubility, and solvation. In English, we are currently reading Moby Dick. We annotated and analyzed a set of chapters that will be the focus in our final projects of the trimester. I had also received a grade back from one of the essays I wrote last week, and got an A-. After classes, I had practice at 3:45. We scrimmaged against the Boys JV basketball team and focused on our transition defense. When practice finished, I went to dinner before heading back to my dorm for study hall. When my homework was complete, I finished the night with watching shows on my computer.
Wednesday - Today I woke up and went to the Health center to get more medication. The classes I had for the day were AP Bio, AP Chem, and History. In AP Bio, we reviewed the DNA replication process. In history, we had a debate about the significance of the Compromise of 1820; and in AP Chem, we started a lab that related to the properties of crystal violet. After class, I went to the gym to get ready for the game I had at 4:15 against BB&N. It was tough win, with a score of 48-43, and I had 17 points. After the game, I showered, ate dinner, and completed my homework for the night.
Thursday - Today I woke up and got ready for school. In Bio, I took a test that was on Mendel genetics, DNA replication, and Chromosomal inheritance. In math, we reviewed problems that would show up on the AP exam in the spring. I had also gotten back the quiz that I took on Monday and received a 100. Following classes, I had practice at 3:45. We focused on conditioning that involved various workout stations such as, burpees, ball handling, weight holds, etc . When practice was finished, I  showered, ate dinner, and completed my homework for the rest of the night
Friday - Today I woke up and went to the health center to get some more medication. Similar to Tuesdays, Fridays are also a full and busy schedule for me. The classes that I enjoyed the most today were History and AP Calc. In history, we further discussed the compromise of 1820, but also explored other compromises that occurred during that time period. In Calc, we were introduced to inverse trig functions. After classes, I had practice at 3:45. My Coach introduced new variations in our offensive sets and focused on our transition defense. When practice was finished,  my teammate and I took an ice bath for about 20 or 30 minutes before heading to the Boys Varsity basketball game. I got back to my dorm around 8pm, and ordered Chinese food with my teammate to finish the night.
Saturday - Today I woke up and had ACT testing for about 4-5 hours. After that, I grabbed lunch and headed to the gym to shoot on the gun with a possible incoming recruit. After shooting, I stayed in the gym to watch a boys basketball game. Following the game, I went to practice the piano for a couple of hours, before taking a shower . Later on, I went to the grocery store and for the rest of the night I watched shows on my computer.
Sunday - Today I woke up, went to  breakfast, and spent majority of the day in the library. I was with a group of kids from my math class and we were preparing for a test that I have Monday. The test is on derivatives and antiderivatives of Ln base e and logarithmic functions. I studied for the entirety of the day, and took occasional breaks to eat etc.

Posted by www.gthingbasketball.com at 3:39 PM