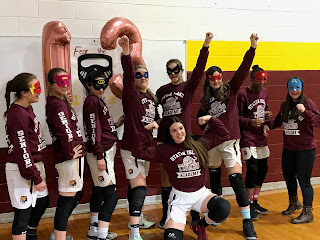 Hello basketball world, this is Em Lapointe signing
in with my Diary Of A female baller Entry #3.

I had off from school today. I was off from practice because we have to go six days in a row. This morning I went to the gym and worked out and put some shots up. When I came home, I spent the rest of the day hanging out with my mom. We went to the Menlo Mall in jersey and shopped for a couple of hours. Once we came home we watched some movies!

This morning I had practice from 12:00 to 2:00. We have three games this week. Tomorrow we play Archbishop Molloy, Friday Francis Lewis, and Sunday Long Island Lutheran. We spent practice preparing for all three of the games. When I came home, I studied for a little while and than hung out with my childhood friends. It was really nice to see them and spend some down time with my girls.

Today, I went back to school, unfortunately. School was not too crazy today: I took my Latin test and the rest of the day was pretty relaxing. After school, the boys team had practice, so we were not able to get into the gym until 5:00. While waiting to get into the gym, my friends and I ate some food and hung around school. It was a really beautiful day so we sat outside. I went into the gym around 5:00 and started warming up. We won our game! My team played really well together. I finished the game with 14 points. After that I headed over to my friends grandma’s wake

After school today the boys varsity had a playoff game so my friends and I stayed to watch them play. The won, however, it was a really intense and aggressive game. The game got a little out of hand, but the boys came out winners! I had practice after the game from 6:30 to 8:00. After practice I went home and celebrated my brothers 18th birthday! My family ate cake and spent the rest of the night hanging out with each other.

Today is senior day! We only have one senior on our team, Liz Althoff. My teammate Francesca and I spent most of our preps decorating the gym, hoping that we made the night very special for Liz. The ceremony started around 4:20. The three juniors and my coach, each said a speech for Liz. After the ceremony it was game time! We had beat Francis Lewis. My team played well together and moved the ball really good. I finished the game with 19 points!

This morning I woke up and went to the gym with my dad and put up some shots. After that I had practice from 11:00 am to 1:00 pm. We scrimmaged, reviewed some game plan, and put up a lot of shots. After practice I went home showered, took a nap, watched a movie, and than later at night hung out with my friend. We ate some food and than went back to her house to watch some movies.

This morning I woke up around 11 and than headed over the my school around 12:00. We played Long Island Lutheran today. Unfortunately, we lost to them. They're a really strong team and my team hung in there for a while, but we couldn’t come out with a win. After my game I went to a family friends wake for a while. I came home from the wake and worked on my AP European project all day!
Posted by www.gthingbasketball.com at 6:14 PM