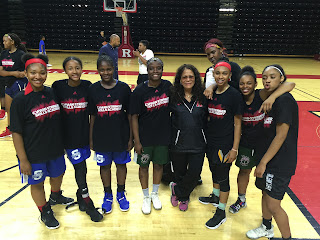 Hello Basketball World, this is Kayla checking in for Week 2.

Monday - Since it was so hot, I had a early dismissal at school. That gave me time to chill out
before my workout at the park. Today's workout was extra hard dealing with the heat. Then I
went to the YMCA to get some shots up.

Tuesday - Today was even HOTTER than yesterday. That meant early dismissal for today as
well. I had speed and agility and a basketball workout after. I had a great speed and agility
workout, probably my best one since I started at that place. In my basketball workout I was
getting really down on myself for messing up. By the end I was making more shots and got it
together.

Wednesday - I had field day today in school and the weather was just right, not too hot. I
enjoyed myself along with my classmates. Division 1 Fairleigh Dickinson University invited my
team over for their elite camp and practice. All the girls in the camp were already in high school except for my teammates and I, but it wasn't that hard to keep up. I try not to get intimidated when playing older girls, I just think they're a little more faster and more physical and aggressive the skill level of the game pretty much stays the same. By the time it came for practice, my teammates and I were worn out but we had to push ourselves. I had a great time at FDU being coached and leaded by 10 of the female players along with their coaching staff.

Friday - My mom picked me up early from school today. When I got home, she washed my hair
then she took me to the hair salon to get my hair braided. I got home and took a nap before
team practice. We only had 5 girls for team practice, but it was alright because we went over
plays.

Saturday - This weekend’s tournament was Rutgers University. My mom, dad, and brother all came along for my two games. My mother is Rutgers alumni and now works for them. In the first game I scored around 15 points along with assists and rebounds. The second game we played a young, but talented team. I did my part and we came out with the win.

Sunday - I had to wake up early for my 9 AM game an hour away at Rutgers. We struggled
against a team that we have always blown out before. We kept fighting on both defense and
offense to generate a better lead. We did just that and won the ball game. My father and I
relaxed until the C. Vivian Stringer Skills Camp there from 1-4. I had fun learning some new and interesting drills.
Posted by www.gthingbasketball.com at 4:23 PM