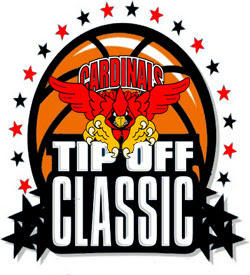 The Tip Off Classic had 7 location, Gthing decided to head to the brand new Sportika Event Center in Manalapan, NJ. They had 7 Full Courts, new air conditioning system, game room, waiting area, state of the art facilities. This event was hosted by the Central Jersey Cardinals and there program director Kristen Somogyi who knows a lot about the game of basketball since she is New Jersey's Girls All-Time scoring leader in high school.

There was a lot of talent in the building this day, one in particular was 19" Jenna Jordan who showed off some good foot work, she is polished in the paint and can give slower big's some down low problems, on the other hand her teammate 21" Izzy Pellecchia will be a player you need to keep your I on this summer and she is playing up. One of good games of the day was New Jersey Belles who faced Books & Basketball. Gthing hasn't seen 18" Ryan Weise play since going to high school, she has develop a lot and has been working on her game. Weise was making things look easy from the outside against a tough BBA team who was battling injuries, 19" Azaina Baines was out, 19" Leah Johnson who we should expect should have a good season got injured, then there was 18" Imani Lewis who has been stepping up her game every AAU season, Lewis size and speed creates problem guarding her on the wing where she is best suited. Both IExcel teams where in the building, there 9th grade team which was playing up did a tremendous job against a well coached Lehigh Valley Fever team. 20" Dayna Tirado is starting to expand her game to the outside more, knocking down consistent 10-12 footer, 22" Skye Owens is always looking gassed up with her great ball handling ability to break defenders down at a young age, whereas there 10th grade team feature some true sure to be highly major D1 kids. Janayshia Brown 20" IExcel 6'2 long frame can get out in go, crazy length and skill to go along with her developing offensive game, Mya Bembey 19" has also stepped her game up shooting a high percentage shot and driving to the basket were she gets fooled most of the time by attacking the rim with her athletic ability. Jasmine Lyles 20" Central Jersey Cardinals had a good showing, major upper body strength helps her absorb the contact while in attack mode, has gotten a lot better putting the ball on the floor in big games, we got a chance to see underrated guard 18" Jessica Beck BBA who shot lights out at the Tip Off she is a steal if your looking for a two. New New Jersey Belle 18" Mya Grimes put in some work on day 2 at the Tip Off Classic, at 6'0 she showed the other forwards and post player how it was to be done, crashing the boards and getting second chance shots is what Grimes lives for. Undersized she is in the post but her heart and determination is what stands out most about her. I was mostly impressed with the youngsters at this event one that stood out was Staten Island Diamonds 22" Grace Sundback who will be definitely talked about in the near future, good size and ball handle should keep Sundback relevant. Crusaders 22" 5'11 Olivia Lawlor should be a high prospect for this class provided that she keeps on working because the sky is the limit for Lawlor. Wing and post player as of right now, depends on the growth spurt in the future to see what position Olivia will play, raw as of right now, but it looks bright.

Posted by www.gthingbasketball.com at 5:08 AM