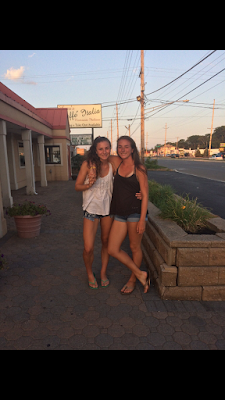 Hello Basketball World, this is Brynn checking in for week #8.

Monday: Boring day at school today. I have a lot of test this week before we are off for spring break so we mostly just reviewed in classes. After school I was going to go to the boy’s first high school baseball game at home, but then I ran into some of the boys from the basketball team and we decided to play two on two. We played in the gym for about an hour and a half. It was a great workout playing with them and it gave me a chance to play against bigger and more physical players which I need to do more.

Tuesday: I had to go in early today since it is the first day of PARC testing for me. Since I am taking PARCI don’t have any of my morning classes. Tonight was the worst practice that I have had in a long time.  I just was not having a good night and didn’t want to be there. I left totally frustrated and upset. I hope next practice will be better. I have two tests tomorrow, so I just studied when I got home and went to bed.

Wednesday: I went in early again today for my PARC testing, but left after the test was over because I felt horrible. I had the worst stomach ache and needed to go home and lay down. It was a bad day to leave since I had two tests to take, but my teachers said I could make them up tomorrow. I was feeling better after dinner so I went for a long run with my friend around town. Then when I got home my sister and I did our ab workout.

Thursday: Today was my last day of PARC and I had to take my two makeup tests. I had studied a lot for both, so I think I did really well on them. One of my best friends is having surgery tomorrow to get her tonsils out, so we went over to her house after school just to hang out together for a little while and have dinner. Tonight’s practice was great. We were back into our flow and worked out most of the night with the older girls. We ran a lot of drills and then scrimmaged.

Friday: Last day of school and we are on spring break! Luckily my teachers did not give us a lot of homework over break. After school I was going to go to the baseball game but it was rained out so I just went home and started packing for vacation. Practice got moved an hour earlier tonight, so we had to leave for Franklin before dinner. Practice was pretty easy tonight since we have games at the Rose Classic on Sunday. I think the team is starting to come together again and is playing well. I hope we do good on Sunday, I don’t know the teams we are playing yet.

Saturday: Today I just hung out all day with my friends. In the afternoon, we all shot around in the backyard for a while and then went bowling after dinner. After bowling, everyone came back to my house to hang out. We ordered food and watched a movie.

Sunday: My dad and I headed to Brooklyn early this morning for our games at the Rose Classic. Our first game was good and we won. The whole team contributed and we were making a lot of shots. The second game we won by 1. We didn’t play a great first half and I sat out a lot. We were down by at least 10 points going into the second half. But In the second half we picked it up and played much better. We had played this team in the fall and they were a really good and really tall team. I think we lost the game in the fall so we were happy that we got this win. I am so excited to be going on vacation tomorrow, I can’t wait.

Posted by www.gthingbasketball.com at 6:09 PM