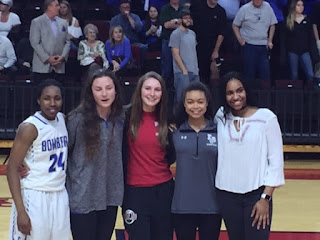 Hello Basketball World, Checking In With Gthing For Entry #2

Monday:  I came back up from the shore this morning for practice.  At practice we did lay-up drills and running on missed shots. We also worked on our press break and breaking a defensive press. After practice the team worked on posters and signs for senior night which is tomorrow at our home game. We only have two seniors on our team, but we also had to work on the boy’s posters too. I didn’t get home until dinner and then everyone from the team came over to finish the posters and put together gifts for the seniors.

Tuesday:  I went in early today with my sister to set up for senior night.  Our game was early today since there was no JV game and the boys played after us.  Even though our opponent was not that strong today, the game was slow and we never really got into a rhythm.  I did not like the way I played today and am not happy with the shots I took. I definitely need to work on bringing more energy to the game on Thursday. We stayed to watch the boy’s game and then I came home to do my homework.

Wednesday: Today I had a geography test on Africa and the Middle East which I think I did well.  At practice, we scrimmaged for most of the time and finished with foul shots. We just found out one of our starters is going to miss the first two games in the state tournament next week which is not good.  I don’t think my coach was too happy.  We are also going to be down two players for tomorrow’s game so it could be a tough game. Tonight I have to work on a social studies project with my group, so everyone is coming over after dinner.

Thursday: Today was our last game of the regular season.  I thought the game went okay although our team struggled on offense and no one was making their shots.  We always seem to come out strong in the first quarter and then have trouble keeping our momentum going in the second and third quarters. We ended up winning the game by one point.  My sister and I stayed to watch the boys game and then I came home to finish my homework.  I also found out I made our county’s all-conference team and would be announced at the county finals tomorrow night at Rutgers.

Friday:  My mom came to school today to meet with me and my guidance counselor to go over my next year’s class schedule.  At practice we had to make 100 layups in a row and had to run on misses.  We also watched some film of the first team we are going to be playing in states.  We are seeded pretty well so we are hoping that we will advance at least a few games.  After practice I went to Rutgers to watch Sayerville against South Brunswick in the GMC finals.  It was a really good game, and Sayerville ended up pulling ahead at the end for the win.  After the game, the all-conference players were announced and we went to the center of the court and took pictures.

Saturday: This morning all of the girls on my high school team volunteered at our girl’s town recreation basketball program.  We each took a different age group and helped them with drills and played a scrimmage with them.  I was with the 3rd  and 4th graders. The little girls are so much fun to teach and play around with.  After we were done, I had basketball practice. At practice we had to make our 100 shots and learn a new play.  We spent most of the time working on our defensive press break.  After practice, Coach Kevin picked me and my teammate Maddy up to go to the Shore Conference Finals. St. Rose was playing St. John Vianney.  The game went back and forth in the first half, but then St. Rose pulled away and won the game.  We got something to eat after and then came home.

Sunday:   This morning my brother and I went to Miller training.  Coach Kevin and I worked on ball handling and step back moves.  Diamond and I also had some fun making some videos of our dribbling skills.  We stayed for about two hours and then I had to head down the shore to my cousins 4th  birthday ​party. I got her a new scooter which she loved.   After the party we came back home and I worked on my English essay which is due on Thursday.

Posted by www.gthingbasketball.com at 11:09 AM