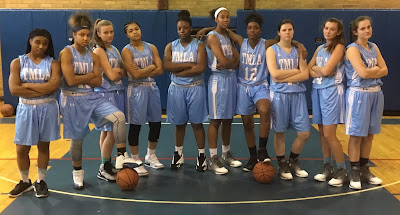 Week 7
Monday: Following another long day of classes, we threw on our things and headed to practice. We focused on getting out in transition, boxing out and pressure defense. We discussed the game the next day, but we dedicated the day to focusing on us and the big weekend ahead.

Tuesday: Today was game day against Cardinal Spellman, a highschool in the Bronx. We didn't prepare too much for this game, but we had confidence that we'd make the right adjustments to ensure the win. From the jump, we were outplayed. We refused to show heart and mental toughness in the beginning, but after a little bit of cursing (an understatement) from the coaches, we picked up our intensity and established a comfortable lead. Ultimately, we pulled out with the win. I was frustrated afterwards due to many different things, but mainly my individual performance.

Wednesday: After the events the day before, we had a discussion about what needed to happen going forward, especially before we took on the number one ranked team in the country. We moved through practice swiftly and talked about the game plan for the coming days. Overall, it was good day.

Thursday: Today was immaculate conception, so TMLA was closed, but we had practice. We watched film and ate breakfast for an hour and a half before hitting the court for another two hours. We focused in for the entirety of practice. I felt particularly determined to find a rhythm since I wasn't happy with my play. After practice, I stayed for an extra hour shooting catch and shoot shots to build some confidence. I headed home later that afternoon to get my hair washed then braided.

Friday: Today we had a shortened schedule, so school ended at 12:30. Soon after, the team had a shoot around at Mary Louis for about an hour and a half. We boarded the bus an hour later and made our way to D.C. On the ride, I thought a lot about my responsibilities for the weekend, which included staying aggressive on both ends of the floor, amongst others. For those who don't know already, I love J. Cole, so his new album, 4 Your Eyez Only, was on replay while I anticipated the next two days. I didn't like the way I'd played in our last few outings, including our scrimmages, so I carefully articulated the details of my play in order for our team to be successful.

Saturday: Today was game day against Ursuline at 2:30 pm. Unlike our first three games, we played with urgency right out of the gate. However, as the game waned on, we lost that sense of urgency, lost our lead and the game. We couldn't dwell on the loss given the gravity of the game the next day. So, we went out to dinner as a team and enjoyed each other's company.

Sunday: Today was the big day. The day we'd been preparing for and talking about for several weeks. Today was the day we played Paul VI. Obviously they are a special team, but despite the pressure and hype around the situation, I approached it as a regular game. I also made sure to remind my teammates of the same thing. The first quarter into the beginning of the second were great spans for us; we flowed well. However, as the clocked ticked down to halftime, we lost our stride and didn't hit it again until the fourth quarter. We struggled to advance the ball and to get momentum-building possessions. The starters sat out for the entire third quarter watching the lead swell to a point of no return, so when we stepped on the court for the final period, running off of the energy left on the floor by the bench, we played HARD. Ultimately, the lead they built was too much to overcome, but we proved something to ourselves: we can compete. Every experience is a learning experience, no matter the outcome, so we talked about it in the car ride back to the city, I reflected on my play, and thought about practice the next day.

Week 8:
Monday: Today was our off day, so we had the opportunity to leave right after classes. I didn't do anything special today except relax and do some homework.

Tuesday: Today was our first practice after the disappointing weekend. My teammates had voiced their apprehension about practice. "What's coach going to do", we thought. Luckily for us, our coach changed the practice plan to adjust to our weak areas as opposed to punishing us. We adopted, "energy", as the theme for the coming week. After a few minutes of clapping, yelling and encouraging each other, the apprehension flew out of the window. We worked hard and remained focused for the duration of practice. After practice, we spent about an hour talking about the weekend, not so much our play, but off of the court team issues. At the end of it all, we resolved the issues and reminded ourselves of the season's goals as well as the significance of sacrifice to ensure success.

Wednesday: Today was pajama day at Mary Louis, so the day was a little bit more enjoyable than usual. I was looking forward to practice after school; we had a high-energy, productive practice the day before and I wanted the same again. thus far. We did a lot of our defense drills, worked on our zone as well as our new offense.

Thursday: Today was an ordinary day at school. I had a couple of assessments and practice about an hour and half after classes ended. Again, we worked on our lagging areas using a high-energy approach, but today we implemented a new offensive scheme in order to get the ball in different spots. I finished the night with some homework and studying.

Friday: Today was dress down day at school, so from the moment that I was able to throw on sweatpants and sneakers to go to school, it felt like a great day. Following the school day, we had our second to last practice before our next game against Neumann Goretti. Again, we were energized especially working within our new offense. It felt great to head home after a productive week in both school and in the gym to watch Netflix, listen to music and complete some homework.

Saturday: I had practice from 10-1 this morning, so even through the snow and slush, everyone was present and ready to go. We had another great, high energy practice to close out a full week of sessions. I returned home and had time to do chores, homework and FaceTime. I finished the night with some core and adductor exercises.

Sunday: Today was game day against Neumann Goretti, the eleventh ranked team in the country. Again, My teammates and I approached it as another game. After getting a whooping last weekend, we were all eager to redeem ourselves. At the end of it all, we won the game and to top it off, we played our best basketball of the season thus far. I'm extremely proud of the way my teammates played from start to finish. After the game, I made my way home to prepare for the next day. I also made sure to do my core and adductor exercises again.

I'm looking forward to this week as we have prayer Monday, so classes are shortened, Tuesday is the only day that we have a regularly scheduled day and Wednesday is the annual Christmas play, so we get dismissed early in the day. Glad I could share the last two weeks with you all, until next time. Signing off...
Posted by www.gthingbasketball.com at 2:45 PM