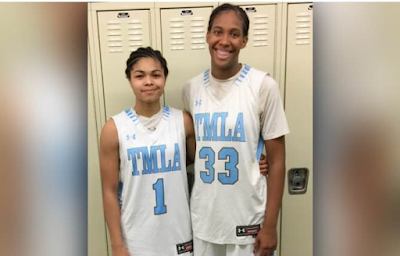 Hey guys, since the last time we spoke, I hadn't played my first official game as a Mary Louis Hilltopper, but Friday, December 2nd was opening night.


Sun: Today was our "off-day", so I went over to a friend's house to watch movies and eat snacks. Later that evening, I gathered my things for practice on Monday, conditioned and completed a full body workout before hitting the shower then the bed.


Monday: Today was a regular school day, no tests nor quizzes. I had practice immediately after school.  During practice, we did several box out drills and reviewed our offensive concepts. Upon returning home, I watched some television, since I didn't have homework due the next day. Later on, I ran my mile. I ran faster than I did the day before and faster than I've ever run. While running, I "blacked out": I was completely focused on keeping a constant speed even when I started to feel fatigue. I embraced the ache and burn and kept pushing. Ultimately, I finished in 5:49. After tryouts several weeks ago, we cut our strength training to two days as opposed to three; in order to maintain my strength, I decided to do full body workout circuits. None of the workouts require any equipment, but I use 10 pound weights for different exercises. After completing the circuit twice, I decided to take an ice bath. Soon after, I hit the bed.

Tuesday: Today, the entire junior class when on the annual retreat in Brentwood, New York. The theme for the day was relationships. I can attribute enjoying the experience to my closest friends. After we returned from the retreat, we had practice, which was cut short for a variety of reasons; however, it was ultimately productive. When I returned home, I began my homework, ran my mile and completed a tough full body circuit.

Wednesday: if I could characterize today in one word, it would be productive. School went well and immediately following, the juniors had a session with our beloved strength and conditioning coach. I can always count on Miss V to make me "uncomfortable": that strand  sensation you get when you've left your comfort zone whether you've began a new exercise, went up in weight or did exercises in a different sequence than usual. After our session, the team headed to practice. There, we worked on transition, game situation shots, post entry passes. We also scrimmaged at the end. I was exhausted from the day, so I decided to rest my body. I went through my regular nightly routine and hit the bed.

Thursday: Today wasn't the most thrilling, but I managed. After school, we had a light practice being that tomorrow is our first game. I couldn't believe the season was already upon us. I'd been eagerly anticipating it since the day I found out I would be attending Mary Louis.

Friday: From the moment I walked into TMLA, my friends and peers started asking, "what day is it?" and it was my job to respond, "It's GAME DAY!" In honor of the first home game of the season, today was also the pep rally. Our game against Nazareth Regional Highschool was scheduled for 6:45, following the Junior Varsity game against Naz; we had to wait the entire day and part of the evening to play. It was a great day overall thank to my friends' enthusiasm. I hadn't experienced a pep rally quite like this one in my former school. In the game, I struggled offensively. Yes, I was a little frustrated, but I kept going. As a team, we slowly built momentum as the game waned on, but everyone had her share of struggles. My coach reiterated after the game, that every win isn't always a good one, but we have to identify the weak areas and build on them.

Saturday: The day after I feel I've had another poor performance is difficult. I'm determined to compete and to get to my spots, but initially, I feel embarrassed; it's unexplainable. Overall, it was a good practice; I remained aggressive. After practice, my mom and I traveled to my friend's house for a massage. I'd never gotten a massage, so this, too, was a first. Ice baths usually do the trick, but I think I prefer a massage. I thoroughly enjoyed the experience and would do it all over again. I spent the rest of the day at my friend's house, talking on the phone and speaking to my mom.

Sunday: Today was our off day, so I finished up some homework, cleaned parts of the house, talked on the phone, walked the dog amongst several other things. I decided not to do anything basketball related for it is a long season, and it's important that I stay fresh and motivated.

After all, it was a standard week, with a few highlights. Glad i was able to share my week with you. Until next time...


Posted by www.gthingbasketball.com at 6:36 PM