SACRIFICES ﻿MUSLIMS MAKE DURING THE MONTH OF RAMADAN JUST TO PLAY BASKETBALL. 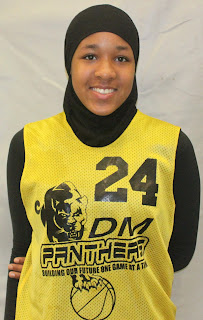 AYANNA JONES (CLASS OF 2017)
Gthing: Let the basketball world know how difficult it is being muslim and playing basketball at the same time ?

Yea-Yea: The difference is since I'm a young muslimah, I have to cover up my body. So when I play basketball I wear a long sleeve shirt and tights under my uniform, I also have to pray fives time a day.

Gthing: How difficult is it during the month of Ramadan to fast and still play basketball ?
Yea-Yea: I wouldn't not say it's difficult, I prepare myself the night before the game by eating plenty of protein and drinking lots of fluids. I also have to know my limits.
Gthing: ﻿Tell the basketball world, and other Gthingbasketball  followers, who don't know what Ramadan is, explain it to them ?


Yea-Yea: Ramadan is the 9th month of the Islamic calendar. This is when the 1st verses of the Quran was revealed to the prophet Muhammad (Saw). All Muslim abstain from food, drinks, and other activities, from dawn to dusk for 29-30 days. When Ramadan ends we have a feast called Eid Al fitr, there is a lot of food and gifts at the Eid. I really enjoy the Eid.


Gthing: How did it feel playing up this year for your AAU team ?


Yea-Yea: It was hard at first, being one of the two eighth graders on a tenth grade team, but the more games We played the easier it became.


Gthing: What did you learn from it ? And if any, did it help you.


Yea-Yea: I learned how to think smarter, about the choices I make while on the court and off, I believe it prepared me for a higher level of basketball.


Gthing: The rumors are that you will be attending Mainland Regional H.S. in Somers Point, N.J. next year, Why the choice school ?