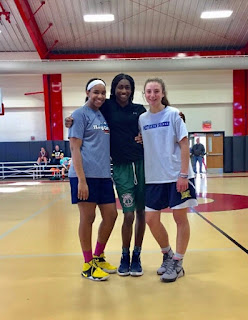 Brynn Farrell and the Miller sisters

Hello Basketball World, This is Brynn checking in for week one of a Diary of a female baller.

Monday:   Today I wanted to go in early to shoot since our first county game was tonight, but I had a science quiz and needed to go to the extra help session before school instead. The science quiz was really hard and long and I am going to have to finish it tomorrow in class.  So, we played our first round of the counties at home against Spotswood.  We were leading the whole game but just couldn’t hold on and ended up losing by 5. I fouled out at the very end and was extremely frustrated with how I played. Today my shots just weren’t falling no matter what I did. The other team had a double and triple team on me most of the game and we just couldn’t seem to find our rhythm. I had my lowest scoring game of the season and was really upset. Our coaches told us after the game we were out rebounded 10-0 during the last quarter and that let the other team back in the game. I really didn’t want to talk to anyone after the game.


Tuesday: Nothing exciting at school today, I finished my science quiz and made Key Lime pie in cooking class. At practice we ran a lot.  Usually after a loss, the next practice is mostly running. Since one of our starters got hurt in the game yesterday, we worked on running our plays with some of our other players. We also worked on some new plays to create space in the middle. After practice, my math tutor came to help me get ready for a math test on Friday.

Wednesday: I went in early before school to shoot this morning.  My goal was to work on my three’s and try to put up 200 shots and 100 made foul shots. I had to give a presentation on my poem in English
in front of the entire class and started a new research project in cooking on fruit.  At practice today we put up a lot of shots and worked on defensive drills. Our next game is not until next Tuesday, so Coach
cancelled practice for tomorrow. I had a lot of homework tonight so the rest of my night I spent on my homework.

Thursday: I went in early before school again to shoot this morning, but this time I had a friend with me to rebound which made it go a lot faster.  I tried to put up 300 shots and finish again with 100 made foul
shots. Since I didn’t have practice, I went to go train after school with Coach Foderingham.  He always works me really hard and we focused on post finishing moves, shooting and ball handling drills. I left exhausted but motivated and finally put Monday’s loss behind me.

Friday: Finally its Friday and we have a three day weekend.  I finished my cooking project and did well on my math test. Practice was short today and we mostly talked about our up coming senior night which
is next Tuesday. We did our normally shooting drills, ran some plays and ended on foul shooting.  After practice we headed down the shore for the night.  The shore is my favorite place. I love to go to just
relax and hang out with my cousins and friends. We had a great night just watching a movie and hanging out.

Saturday: This morning I came back up from the shore to go to my cousin’s CYO basketball game. After the game I went to train with Coach Foderingham. Today we worked on splitting screens and deep
threes. We also worked on transition moves and finishing.  Coach Foderingham said we took almost 600 shoots during the workout.  I was frustrated at first because my shot just seemed off and nothing was going in, everything just hit the rim.  We worked on my form and finally my shots started looking better. After training, I went with Coach to the Franklin/Gill St. Bernard county game.  I know a lot of the playerson both teams, but especially like to go watch when any of my AAU teammates are playing.  After the game, I went with my little brother to his AAU tryouts. I hope he makes the team.​

Sunday: I slept in this morning and then went to train with Coach Kevin, my AAU coach at the Team Miller clinic. I usually try to go every Sunday morning and work with Coach Kevin on the things that
gave me trouble during the past week’s games.  Today we worked on floaters down the middle into pull ups, shooting off the dribble and deep threes. We finished with transition defense, making moves and
finishing with the pad.  I was really happy with the workout today and am looking forward to our games this week.  After the workout, I headed down to my other cousin’s CYO basketball game and then to the beach for the night. No school tomorrow, but I have to be back for practice at 10.
Posted by www.gthingbasketball.com at 9:10 AM