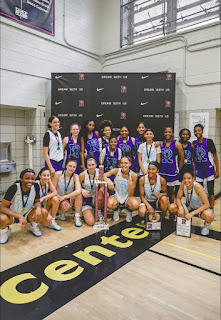 
Hello to all the ballers out there, welcome to week 7 of my diary


Monday - Today we spent the day at my cousin's house in MD. Hung out by the pool all day. It was a great way to relax and spend time with family.

Tuesday - I was so exhausted from the ride back home that I skipped school today and slept until 1pm. When I woke up I unpacked all my things and spent the rest of the day cleaning my room.

Wednesday - Today We had a good day at school. We worked on a dance project during dance class. After school I went out for pizza with some of my friends before my mom picked me up. We had basketball practice so I was traveling with some teammates and their mom. We ended up going to the wrong address and drove all the way to Brooklyn NY instead of the Bronx. I was so upset because I was looking forward to basketball practice. My friend's mom felt so bad about the mistake that she took us all out to dinner and offered to pay for our training session the following day. The day ended on a good note.


Thursday - Today we had an assembly at school which was a lot of fun. After school my mom picked me up to go to training with my teammates. We worked out really hard, but also had a lot of fun. After workouts we went back to Rylie's house and had some really good Greek food. I love going to Rylie's cause they always have different types of food to eat and her family is really nice.

Friday - Usual day at school today. After school I went to my one on one with Mark to work on my shot. I haven't gotten a chance to work on it individually as much because of all the crazy traveling so it was a bit off. I have to get back on my routine.

Sunday - Today I woke up so nervous about the games. MY thoughts were that I would probably sit on the bench and cheer the team on and not play. The semi game was so exciting. The 17U team had a good lead and I was able to get in the game. I made some shots but missed. I went on a fast break and passed the ball to Dom and she passed it back to me for a layup, I was so surprised that I missed the layup. It was so fun to play with the older girls that I look up to and lear from them. We ended up winning and played against the 16U EYBL team. Both exodus programs played each other which was awesome. I had a better game the 2nd time around and even scored 5 points. Our 17U team won the game! afterwards we all received a TON of gear from Nike and got to speak to a former WNBA player. It was one of the best experiences of my life.


Posted by www.gthingbasketball.com at 5:43 PM