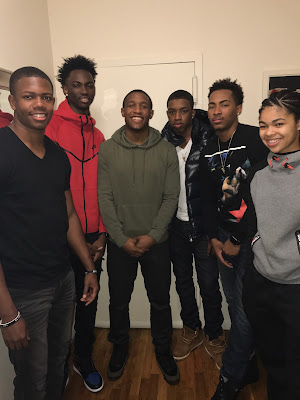 Hey guys, I hope you enjoyed your couple weeks as much as I did. There were days with a few more tribulations than others, but I got through it. I will tell you all about them in Weeks 9 and 10 of Diary of a Female Baller.

Monday: Today was a shortened school day because we had Christmas Liturgy that afternoon. Immediately after, we had practice. We continued with the drills we used the last week that keyed in on our weak areas. I was a little down at first after reflecting on the game; I didn't feel like I contributed to the win since I sat for a large portion of the game due to foul trouble.

Tuesday: Today was a regular school day, but still a little more exciting than the rest. It was our last day before Christmas  Break. The day dragged a little, but I was looking forward to practice at Elmcor, a community center gym in queens. The court is much larger, which allows for more realistic spacing when scrimmaging or doing live drills. It wasn't an easy practice. Many struggled to bring the energy, so a couple of my teammates and I encouraged the others to pick it up. We had an off day the next day, so we wanted people to push through and give it all they had left. Needless to say, we got through it and Christmas Break had officially begun.

Wednesday: Today was my first TMLA Christmas. All students are able to dress down and walk around the school for two and half hours or so. My seven closest friends and I decided to do secret santa, so after the day's festivities, we gathered in the auditorium and exchanged gifts; I'd never done secret santa before this year. There were a lot of smiles and hugs. Once the teachers kicked all of the students out of the building to start their faculty party,  we went to KP's house before heading to Dallas BBQ later that afternoon. There, we blasted the radio and ate candy to our heart's content until we became sick of the sugar and decided to head out. Once we arrived at the restaurant, in routine fashion, I kindly told my friends to put their phones in the middle of the table to force conversation. Of course, at least one had to refuse, but everyone else complied. We had a great time, so great that no one wanted to go home. Luckily for a few of us, our parents gave us permission to go to the mall for a couple more hours. The hardest thing was saying goodbye, but we did eventually; today was one for the books.

Thursday: Today we had practice in the early afternoon, which allowed me to get a little more sleep than usual. Overall, practice went well. We were able to cover a lot of ground in our two hours together. After practice, I stayed around to put up a variety of shots; I think it's really important to have an assortment of shots for different spots on the court. After shooting, I headed home and spent the remainder of the day in the house besides the couple of walks with my dog.

Friday: Today was my last practice before Christmas Break. It went well overall. We all brought a lot of energy and worked hard for two hours, with the occasional lapses. I didn't have to get home the late afternoon, so KP, Vee and I hitched a ride with our coach to Green Acres Mall. I mean, Queens is great and I love spending time with my friends, but I don't think I'll be taking that hour bus ride from Green Acres to an hour train ride home again anytime soon. Later, my mom and I headed to the Poconos to help my aunt prepare for the impending holiday. There'd been a lot going on within my family, so several Christmas traditions such as, going to the Poconos and decorating the tree about two weeks prior to Christmas, dissolved on this particular year. However, everyone's spirits seemed to still be high. We did a little bit of cleaning and prepping for cooking the next day before hitting the bed.

Saturday: Christmas Eve! I love the Poconos all year round, but especially during the winter. Usually, we don't have the opportunity to stay for more than a day and a half, so I was really excited. The day was both productive and fun; I tried to savor every moment with my family because once the season kicks into full gear and AAU begins, it gets very difficult to make the trip up there for a gathering. I was upset that I had to miss practice given the competition we'd have to face at Title IX, but spending the day in the Poconos made it worth it.

Sunday: Christmas Day! I love the holidays especially Christmas morning. Not for the conventional reason of getting gifts, but over the past few years, my family and I have inadvertently started traditions. Such as, my aunt getting up and making coffee for all of the adults in the house, me getting up and tapping my mom right before I walk the dog or listening to Christmas music ALL DAY, amongst others. The day was everything I hoped it'd be and then some because my uncle, who had recently gotten his foot amputated, came home for the day. He was in such high spirits and just for a little bit, it felt like old times. We laughed, snacked, and sang a lot throughout the day. I enjoyed every minute before my mom, brother and I had to head back to the city.

Week 10:
Monday: Today we had a 9 am practice which I was unable to attend because of problems with public transportation. I was extremely bothered. For one, I hadn't shot a basketball in two days, which isn't a good thing, but what could I do.

Tuesday: Today we packed up on the Mary Louis bus and headed to Title IX in Washington, D.C. Since my mom wasn't able to attend this trip, I was a little uneasy at first. I'm accustomed to her being in the stands screaming at the top of her lungs, but this was an opportunity for maturation.  After all, my mom won't be able to attend all of my games in college, so its best that I experienced uneasiness now rather than later. Although our game was scheduled for the next day, the tournament coordinators hosted a banquet for all teams to discuss Title IX as well as to educate us on the gender gap and measures being taken to close that gap, amongst a list of other topics. Overall, it was a successful event. I enjoyed it because I was able to dress up, eat and learn a little bit. We arrived at the hotel fairly early in the evening, so we talked and laughed a lot before hitting the bed.

Wednesday: Today was our first game of the tournament. We were placed in the highest division and our first opponent was Ribault, the number 3 ranked team in the country. I knew that I'd struggle to get into a rhythm, which happened, because I hadn't touched a ball in four days (I'm never doing that again). The team as a whole struggled on the offensive end, but we also allowed them to have their way with us on the offensive and defensive glass. It was a learning experience and we were looking forward to playing better in the game the next day.

Thursday: Today was game day again, so we followed the same routine. I wasn't content with my play the day before, so I made the necessary adjustments in the stretches as well as in the little things like consuming water based fruits and not drinking too many liquids pre-game.
After all, we came out with the win. Again, I wasn't happy with my play on the offensive end, but I made sure to contribute in other ways. Later that night, while reflecting on the games, not only in D.C., but over the course of the beginning stages of our season, I had not been doing the things that had kept me sharp during pre-season. I had started wasting precious time. I had started making excuses as to why I shouldn't push myself. I became content. That night, I vowed that I would develop those good habits that'd benefitted me in the past.

Friday:  Today was the last day of the tournament, so I had one more game to give my all. We played well overall, especially my teammate Danielle Patterson who had a whopping 30 points that day, even though we didn't come out on top. I was disappointed in myself, but I was more concerned on the near future; I was ready to develop my good habits again. I arrived back in the city later that night. It was a tough week, but I learned several things and decided to move forward with the newly attained information.

Saturday: We didn't have practice today, so I spent some time at home cleaning and such.

Sunday: Today felt like a new start for me. I wasn't satisfied with way I finished 2016, so January 1st marked the first day of another long, hard siege to achieving my goals. My mom, god sister decided to head out to get breakfast after which, my god sister and I were able to head home and watch movies and play uno. I didn't have practice today, so it seemed in my best interest to enjoy other things like my family. Later that evening, my mom, god sister and I attended a huge family gathering at my cousin's house. It was a lot of fun chopping it up with my other cousins and of course, grubbing; it was a great start to the New Year.

It's been a long ten weeks, and I both learned and grew from all of my experiences. Thank you to GThing Basketball for this opportunity to share a little bit of my life with the Basketball World.


Posted by www.gthingbasketball.com at 8:04 PM